ISABELLA - The land acquired by Ralston “Duffy” and Nancy Bauer for Camp Buckskin in 1959 has a long history as a place for mentoring young people. 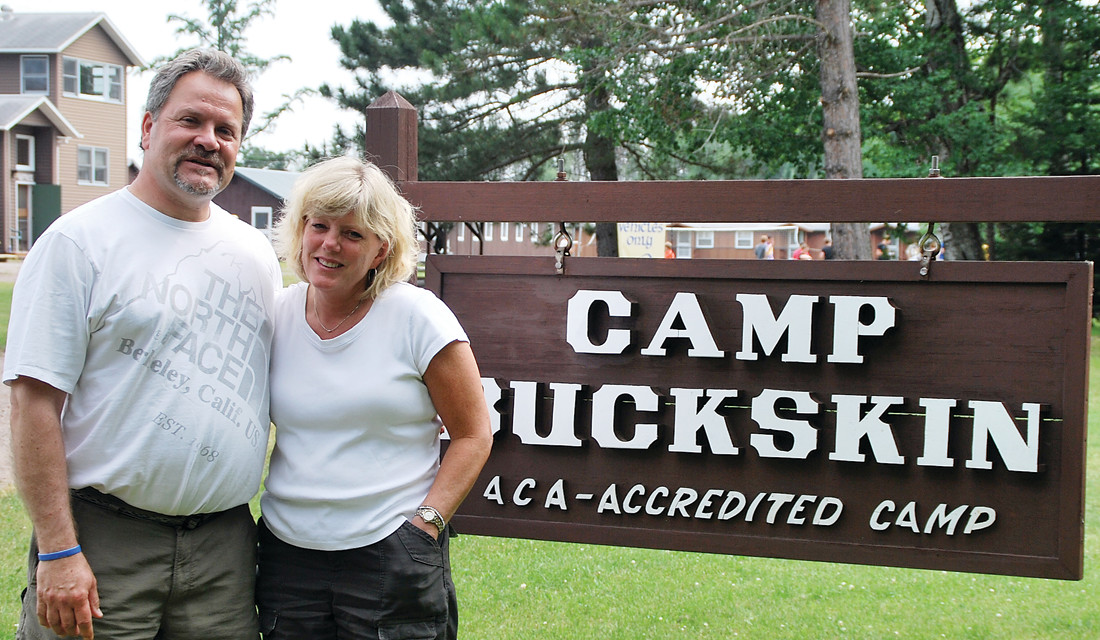 Tom and Mary Bauer are the directors of Camp Buckskin. The camp, located near Isabella, has been mentoring children for the past 55 years.
T. Jackson
Posted Thursday, September 12, 2013 11:00 am

ISABELLA - The land acquired by Ralston “Duffy” and Nancy Bauer for Camp Buckskin in 1959 has a long history as a place for mentoring young people.

During the 1930s Great Depression, the St. Croix Lumber Company sold about 175 acres along the western shore of McDougal Lake near Isabella to the federal government, which soon built a Civilian Conservation Corps camp at the site. During the depths of the nation’s worst economic conditions, the CCC camp provided much-needed employment and skill-building for those whom the Depression had left unemployed.

Toward the end of the Depression a local veterans group acquired the property, although it was unable to make it go financially. A private party from St. Louis, Missouri, tried operating a camp offering sailboats and horseback riding, but that also was short-lived.

Duffy and Nancy Bauer, who had extensive educational backgrounds and hands-on experience in the mental health field, purchased the land in 1959 with a vision for developing a camp to help children with underdeveloped social skills. They were frustrated and disillusioned with the assistance they could only offer in a traditional hospital or office setting.

Camp Buckskin had only one camper, the son of a psychiatrist colleague, when the camp opened in 1959. The youngster thought he was at camp to work, but Duffy was being paid to mentor the child.

This humble beginning developed into a successful program that now employs a staff of 60 that helps children ages 6 - 18 to cope with attention deficit hyperactivity disorder (AD/HD), Aspergers Syndrome and other underdeveloped social skills.

Duffy was at the camp every day until his passing in 2004. Nancy continues to visit the camp several times weekly and assists by running errands and picking up mail in Ely. The current camp director is Tom Bauer, son of Duffy and Nancy, and his wife Mary serves as assistant director.

Tom Bauer was two and-a-half years-old when his father purchased the camp in 1959. He lived at the camp until the summer of 1980 when he left for graduate school in Florida to attain a degree in geology. “I worked for five years as a geologist and realized office work was not for me,” said Bauer. He returned to Camp Buckskin on a full-time basis in 1987 when his parents were contemplating what to do with the business.

Bauer worked in every position at the camp except teaching, which requires a teaching certificate. He became camp director in 1991 and continues in that role today. Mary is assistant director and food service manager. “She keeps me organized,” said Bauer, “and has the ability to ensure the camp meets our expectations.”

“We are not going to cure or fix anyone in a month, but a behavioral psychologist will tell you a minimum of 21 days is necessary to unlearn one habit and begin learning a new one,” said Bauer. His expectation is that the camp experience will help the children get along better with their peers, have more confidence in their own abilities, and accept responsibility. In addition, the children will develop coping skills and handle frustration in a positive manner.

“Many of our children are bullied in school and have very little self-confidence,” said Bauer. Tom finds it heart -wrenching to listen to a young girl tell him she doesn’t get anyone to attend her birthday parties or sleep overs. The campers learn that bullies make themselves feel better by putting someone else down. “We are hoping the camp experience will impart the confidence and skills needed to not react.”

“Camp rules are based on three rights,” said Bauer, “and they apply to every camper, parent and staff. The first is the right to be and feel safe. The second is the right to learn as much as you want or are able. The third right is to have fun and enjoy yourself. Bauer refers to these three rights as a sieve. He said, “We allow the children to sieve what they did through those three steps. A ‘poor choice’ is a phrase or action that interferes with someone else’s enjoyment of one or more of their rights.”

This philosophy helps the children understand how their words and actions impact other people. “We help our campers understand why something was a ‘poor choice’ by referencing the three rights,” said Bauer. Constant reinforcement of this understanding teaches campers responsibility and problem solving. They learn the necessary skills to get along with others. “We are trying to get them to think differently so they react differently.”

“Children need structure and consistency in their lives,” said Bauer, “which are the most important necessities we can provide for them.” The children are most comfortable when they know what their expectations are and a schedule is consistently enforced.

Structure and consistency are maintained as campers participate with their cabin group in six core activities at precisely the same time daily, Monday through Friday. Activities include swimming, canoeing, archery and riflery, reading and writing, arts and crafts and nature and environmental studies. Activities are designed so that each child will advance through various skill levels. This consistency of learning, playing and working together promotes better relationships and self-confidence. “Even though the children rotate through the activities as a group, their progress is based on individual effort,” said Bauer.

Every activity has a special space on the dining hall wall with each child’s name indicating his or her level of progress. Verbal recognition is announced after every lunch and dinner. “Think of the impact on the child,” said Bauer. “Here is a 10 or 11-year old child that has not experienced much life success and now 80 peers and 50 to 60 staff members are giving a standing ovation because that child accomplished something good on his or her own.”

Further recognition of individual achievements is announced at the awards ceremony during the last two nights of camp. “They are getting the support and positive reinforcement needed to fulfill a better life,” says Bauer.

September. There are 80 to 90 children per session and about 20 percent participate in both sessions. The staff this summer totals 60 or two staff per every three children. The cost per child at each session is $4,300, which is all-inclusive.

Communicating and offering support to parents are integral program components. “A comprehensive report is provided to parents at the session end,” said Bauer, “and this helps to reinforce the progress of the child. Parents often call me after receiving the report and we discuss possible options if their child continues to have issues at school.”

Bauer is encouraged by feedback he receives from campers and parents. “Here is a young lady that has attended nine sessions in eight years,” said Bauer as he smiled holding onto her last graduation picture. When a returning child runs up smiling and says, “I am back,” Bauer is encouraged. “None of our children would do that the first day,” said Bauer. Many children are second-generation campers, sent by parents who had a positive experience years ago.

Bauer does not underestimate the value of good, competent staff. “We hired many wonderful staff from Ely over the years,” said Bauer. Fred McReady, a former high school math/physics teacher and hockey coach, was the first program director. “He taught me to canoe back in the day,” said Bauer. John and Sandy (Gotchnik) Chelesnik, Jan Lekatz and Pat Prijatel are a few of the teachers from Ely who taught reading and writing at camp.

The jury is still out on whether the family legacy at Camp Buckskin will continue beyond Bauer. Bauer’s eldest son, Jeff, is 25 years- old and a graduate student working with non-verbal autistic children in the Twin Cities, who plans to become a licensed special education teacher. Tyler is 21 years old and a program supervisor at the camp. He is currently an education junior at University of Minnesota-Duluth (UMD). Matt, 15 years old, is the youngest son and mows grass at camp three hours daily and also is a leader in training activities for another three hours.

Further information about Camp Buckskin and the program they offered can be found online at http://campbuckskin.com.