ELY – The International Wolf Center has two new residents, and now they have names. The two male wolf pups were named “Blackstone” and “Caz” in an online contest, the … 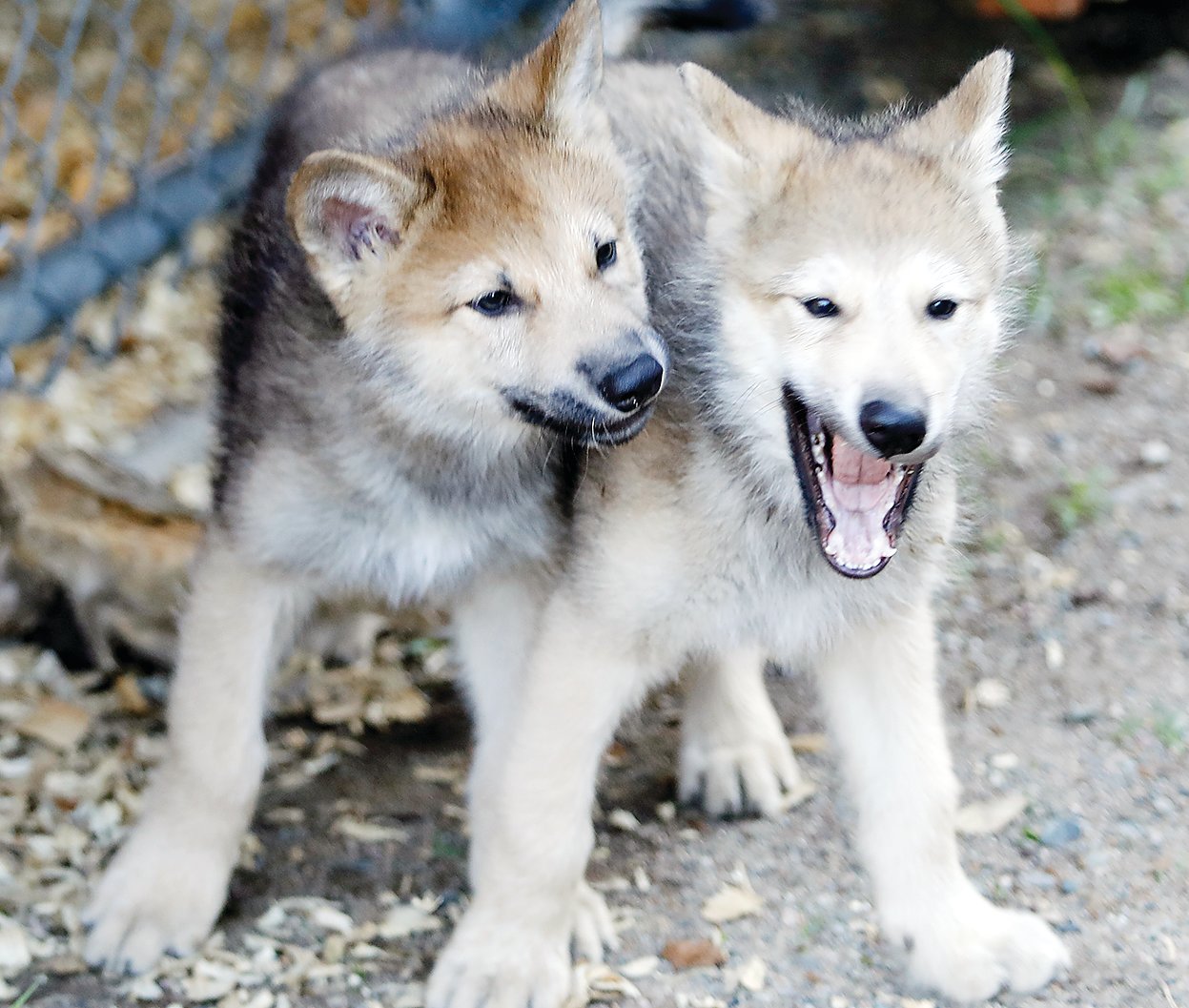 Newly- named wolf pups Blackstone and Caz were playful during a recent public showing of the new members of the wolf center’s ambassador pack.
K. Vandervort 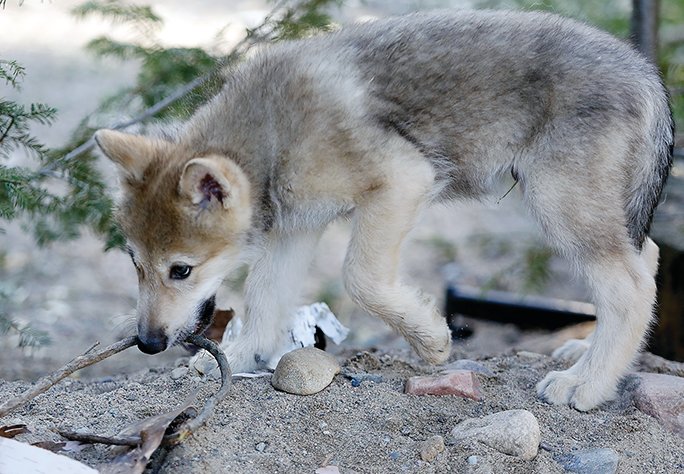 Blackstone tugs on a root he found inside his enclosure.
K. Vandervort
Previous Next
Posted Wednesday, June 15, 2022 7:27 pm

ELY – The International Wolf Center has two new residents, and now they have names. The two male wolf pups were named “Blackstone” and “Caz” in an online contest, the results of which were revealed during the Howl at the Moon Gala, held virtually on Tuesday.
Contest participants chose from the following selection of names and meanings for the first pup, temporarily named Blackbeard, because of his darker snout:
Blackstone - in honor of Blackstone Lake in the Ely area.
Beaufort - Beaufort Sea is a marginal sea of the Arctic Ocean, located north of the Northwest Territories, the Yukon, and Alaska, and west of Canada’s Arctic islands. These pups were termed “Alaskan Tundra” by the USDA source facility
Broder - the Scandinavian word for brother.
The other wolf pup name selections and meanings included:
Caz - Celtic nickname for “watchful one” or “descended from the vigilant” according to some sources (much like his personality).
Cap - in honor of Dorothy Molter’s father’s nickname and Cap Lake in the Ely area; also, could be in honor of Black Cap Mountain in Alaska.
Kapp - old Norse origin meaning “zeal, energy, competition.”
Caspian - a boy’s name meaning “white” (Cap’s cheek hairs are white) as well as being a geographical name of the large salty Caspian Sea between Asia and Europe.
The addition of the new wolf pups this spring happened very fast.
The Ely Wolf Center planned to add pups in 2020, but the COVID-19 pandemic forced officials to delay those plans for one year. And last year, the Wolf Center was only able to procure one pup.
“Adding pups this year was important for the health of the pack, and to allow our yearling wolf, Rieka, to experience some pup behavior she lacked as a singleton,” Wolf Curator Lori Schmidt said.
“We had three educational facilities lined up to work with, two in Canada and one here in the United States. Pup welting is always a waiting game. One facility’s mating pair didn’t work out. The other facility’s just had a single pup available this year, and they decided to keep her. The third facility, where Rieka came from, had multiple breedings but each had just one pup,” she said.
Schmidt said she looked for other wolf pup options, through the help of the U.S. Department of Agriculture, and found an acceptable facility in western Minnesota. “I haven’t dealt with them before but they are very reputable in the ‘zoo world,’” she said. “That was a whole new experience for me to work through the American Zoological Association. They were a little bit older so we didn’t bottle feed them, as we normally start with that at 10-12 days of age.” The new pups were born April 6, so Wolf Center staff spent a lot of extra time working on their trust since we received them in mid-May.
”It was out of the blue this year,” Schmidt said. “I had one place in Michigan lined up and ready to go, but they wanted to ship them to us, but that was a red flag to us. Four other colleagues I work with also warned me about that.”
The 2022 pups were acquired from a USDA regulated facility in western Minnesota. “It is a wildlife park located west of Brainard,” Schmidt said.
The two new pups, born April 6 and brought to the Ely facility on May 10, were unofficially named “Blackbeard” and “Captain” by Wolf Center staff as they got acquainted with the new ambassador pack residents.
They are Alaska Tundra or Northwestern wolves. Wolf Center staff will conduct DNA sampling.
“We want to know the species as best we can determine. They are clearly wolves. They have huge feet and are growing as much as a half-pound per day,” she said.
The two new pups will likely join the other three wolves in the ambassador pack in early August, according to Schmidt. Axel and Grayson are each six years old, and Rieka turned one year old last month. Schmidt estimated that once all five of the ambassador pack members are in the exhibit enclosure together, the lone female, Rieka, will take over as pack leader.
“Rieka is still mentally kind of a juvenile and missed out on all the roughhousing and playtime with a litter mate,” Schmidt said. “We felt it was healthier for her to have some play companions. Rieka will be the dominant female, and she already acts like it. These new pups have already had a tremendous influence on them. She is already guarding them from the other boys and has that hormonal care-giving behavior.”
See the pups
The Wolf Center’s newest residents are available for public viewing.
One way for Ely Wolf Center visitors to see the pups is through an outdoor viewing area adjacent to the wolf yard, where pups will be spending time conditioning to the human component of a public exhibit. These programs are dependent on the weather, according to Wolf Curator Lori Schmidt. They last 15-minutes each and are held throughout the day. General admission prices apply.
Another way to see the 2022 wolf pups is with a one-hour behind the scenes tour. These tours are only available only for members of the International Wolf Center. Information about membership is available at www.wolf.org.

Focus is aim of young t-ballers