ELY - MIDCO, the newest fiber internet provider operating in Ely, announced the start of fiber hookups on Monday. The firm, one of two fiber providers in the city, recently completed a two-year … 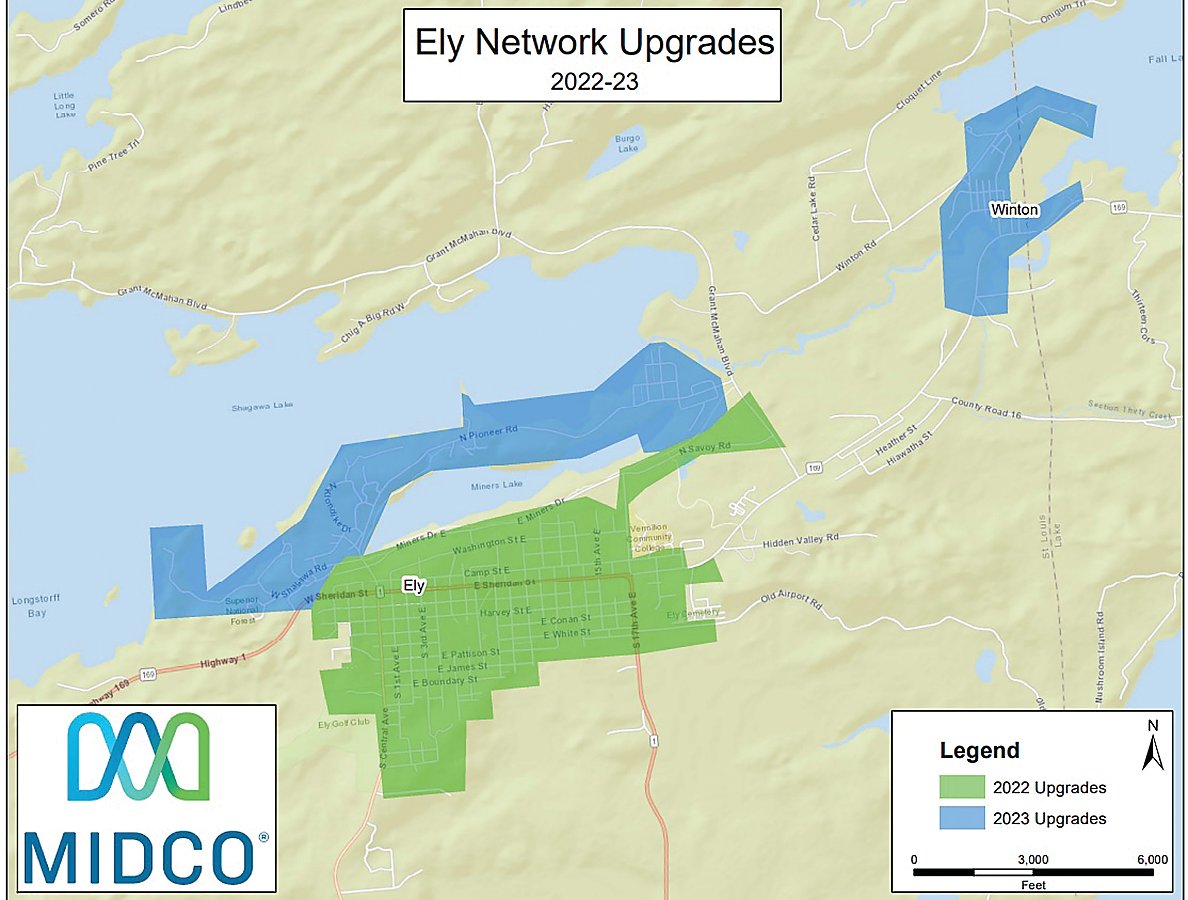 ELY - MIDCO, the newest fiber internet provider operating in Ely, announced the start of fiber hookups on Monday. The firm, one of two fiber providers in the city, recently completed a two-year project to install fiber infrastructure throughout the city.
Fiber rollout
“Our first customers gained access to fiber internet starting Nov. 29, and we’re rolling out fiber to more customers every week through February,” stated Paige Pearson Meyer, MIDCO’s director of corporate communications in an email. “Ely residents will be notified as they gain access to fiber.”
MIDCO plans to provide initial fiber connections to service groupings of 60 to 120 houses on a rolling basis.
“We’d like to do 1,000 connections by Christmas,” said Cole Mack, MIDCO’s VP for field engineering and construction, who works out of Bemidji. Mack said that the company’s fiber service area includes 2,500 homes in Ely and Winton.
Existing customers will receive notification that a fiber hookup is available through their preferred communication channel with the firm. MIDCO will also initiate a marketing campaign about fiber availability to potential new customers.
To handle the anticipated volume of connections, Mack said, “We’re bringing in crews to do the work.” The crews are from other MIDCO offices in the northern Minnesota region coming in to supplement the firm’s Ely field service staff of three plus their manager.
Improved service
The known service improvement of a fiber internet connection is the speed.
“We currently offer plans for up to five gigabits per second (Gbps). Of course, most people don’t need those speeds,” Mack said. He added that many modems can’t handle that top speed – yet.
“The technology will catch up, but we built this network to last through the end of the century.”
In addition to higher speeds, the fiber service will offer a 100-percent high-density video service branded as MidcoTV plus a “home wireless solution,” Mack remarked, since the fiber modems MIDCO can provide have much greater reach than older cable modems.
Mack said that the unseen story on the service is MIDCO’s new “back-end” infrastructure that has built-in redundancy: “(For coax-cable infrastructure), Ely was isolated. We suffered service losses in 2019 and 2020 because of this. Since last year, we’ve been getting a new back-end network in place.”
MIDCO wanted outages to be a thing of the past. To achieve that, the new network uses two leased fiber lines from the Northeast Services Cooperative, one coming in from International Falls and one coming up from Duluth. On top of these two fiber cables, MIDCO has installed its own network equipment, including all its own fiber cable throughout Ely and its environs.
“The big highlight is that there are now two paths for internet into Ely,” Mack stated. “Our equipment is redundant, so even if one (into Ely) goes down, service will be uninterrupted as it continues on the other line. The new network is also passive, meaning that it doesn’t depend on city power like the old coax lines. If the city power goes down, we have our own power plus local back-up generators to keep the network live.”
Future plans
While MIDCO will offer fiber connections in the City of Ely this winter, the firm will also continue to expand its fiber internet service area. “We will be expanding across the northside of Miners Lake in the spring and summer of 2023,” said Mack. Winton will also be included in the 2023 expansion.