REGIONAL— Wildland fires are continuing to keep officials on the Superior National Forest busy this summer. Just as the Forest Service announced it was lifting closures put in place for the … 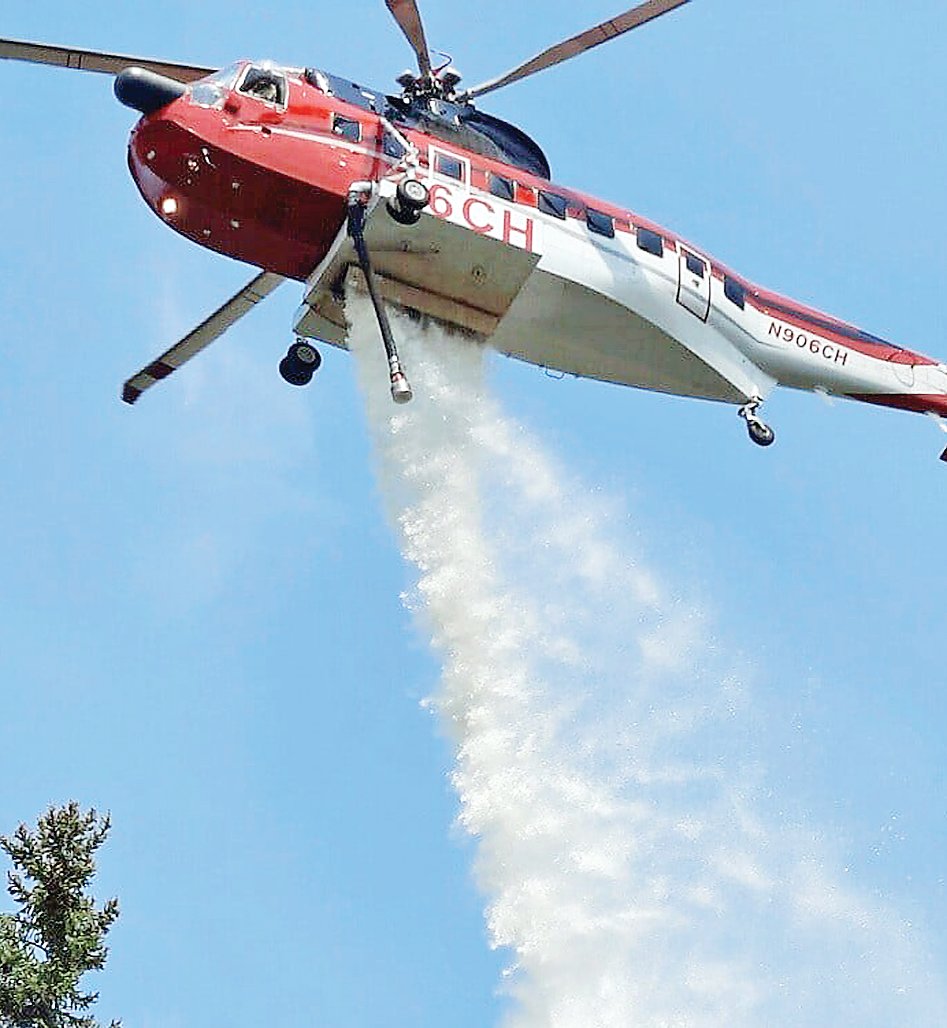 A helicopter dumps a load of water on the Phantom Fire, about 10 miles west of Ely, on Sunday.
US Forest Service
Posted Wednesday, July 28, 2021 9:04 pm

REGIONAL— Wildland fires are continuing to keep officials on the Superior National Forest busy this summer. Just as the Forest Service announced it was lifting closures put in place for the Delta Fire, near the Fernberg Road east of Ely, they began water drops on two new fires while they continue to monitor several other new blazes, reported in the wake of thunderstorms that hit the area last Friday and again on Monday.
While rains associated with that storm provided temporary relief from the very high fire danger, last weekend’s hot, dry, and windy weather quickly elevated fire conditions and increased fire activity with the new ignitions.
The Monday night storms produced plenty of lightning but only minimal rain, so more fire starts may well become apparent in the coming days.
Most of the new fires are located in the Boundary Waters Canoe Area Wilderness, where months of below-average rainfall have left the area’s shallow soils parched.
Two of the fires, known as the Phantom Creek and Bear Creek fires, are located just north and east of Lake Vermilion. They were both detected over the weekend and by Sunday they were beginning to grow after smoldering for a day. The National Weather Service had instituted a red flag warning on Sunday due to strong westerly winds, low humidity, and temperatures in the low 80s. The Phantom Creek fire was first detected July 24 and had burned about 3.5 acres as of Tuesday. It’s located north of the Wolf Lake Road, east of Lake Vermilion. The Bear Creek fire, located north of the Mud Creek Road was first detected on July 22 and had burned about 10 acres as of mid-week.
Water-scooping aircraft, including three Fire Bosses and three helicopters, were working from Lake Vermilion over the weekend to slow the growth of both fires, while ground crews worked to gain access to the sites.
Meanwhile, several other new ignitions have been reported since Sunday, including a blaze near Fourtown Lake (see related story this page). Three other new fires were confirmed as of Tuesday, including the Sundial South fire, which is smoking but has shown little growth. The other fires include the Ima fire, located about five miles west of Snowbank Lake, and the Slowfoot fire, located about a mile southeast of the Delta fire.
All current fires and any new starts in the coming days will be fully suppressed by available initial attack resources from the team and local area.
Delta fire wrap-up
Meanwhile, Forest Service officials were confident that it was safe to lift the closure after the completion of an infrared flight over the Delta Lake Fire which detected little to no heat outside the original 62-acre footprint of the fire. As of Monday, fire officials reported that the fire was 92 percent contained and that permit areas and trails in the area were once again open to public use. Crews had mopped up hot spots in the interior identified by aircraft.
Firefighters continued to patrol and cool hot spots as they begin fire suppression repair, which involves removing fire equipment and maintenance to return sensitive areas to their pre-fire natural condition.
“We’re so grateful for the firefighters and the Type 2 Teams who came from across the country to help us respond to the Delta Lake Fire and other fires in the West Zone Complex,” said Superior Forest Supervisor Connie Cummins. “Although we are confident that the Delta Lake Fire containment line is secure, this isn’t the end of the fire season. The drought continues and the fires are still active in Canada,” said Cummins.
The following areas are again open to BWCAW permit holders:
Drag Pristine Management Area
#56-Kekekabic Trail East Entry Point
#74-Kekekabic Trail West/Snowbank Entry Point
The entire Kekekabic Trail.
The following lakes, campsites, and portages: Parent, Disappointment, Jitterbug, Ahsub, Becoosin, Benezie, Adventure, Rifle, Bridge, and Fire.
“I also want to recognize that this isn’t easy on our permit holders, cooperators or partners.  I want to thank our visitors for working with our wilderness rangers, clearing the closure area and understanding that this decision was made for safety reasons. I’m happy that we can announce the end of the Delta Lake Fire closure and that people can get back to enjoying this part of the wilderness,” Cummins added.
Meanwhile, several large fires continued to burn this week in the Quetico Provincial Park, just across the international border from the BWCAW. Three of the fires have the potential to spread south across the border into areas near Crooked and Iron lakes, according to officials.

Is peak upon us?