A new development in Winton; plans revealed for longtime saloon

WINTON – The Longbranch property here, 23 acres on the shore of Fall Lake, was sold last fall by the Ely-Winton Rod and Gun Club to a Twin Cities eatery collective, Travail Kitchen and …

A new development in Winton; plans revealed for longtime saloon

An aerial view of the Longbranch Saloon on Fall Lake in Winton.
submitted 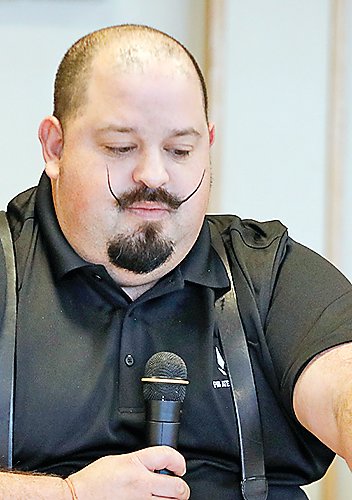 Mike Brown talked about his collective’s plans for redevelopment at the Longbranch during a joint powers meeting in Ely last month.
K. Vandervort
Previous Next
Posted Wednesday, January 12, 2022 7:25 pm

WINTON – The Longbranch property here, 23 acres on the shore of Fall Lake, was sold last fall by the Ely-Winton Rod and Gun Club to a Twin Cities eatery collective, Travail Kitchen and Amusements, and the new owners have a grand vision to help boost the economy of the area.
Winton Mayor Kathy Brandau introduced one of Travail’s owners, Mike Brown, at the recent legislative session of the Ely Economic Development Joint Powers Board.
“They have a plan in place to bring economic development to the city of Winton and the area,” she said. “The city of Winton and our engineer will be working with them to redevelop this property.”
Brown, one of three chef/owners of the Travail Collective, presented his group’s vision for the sprawling land that includes 900 feet of Fall Lake shoreline and a 5,000-square-foot building that was the original dining hall at Maple Leaf Lodge in the BWCA.
He described a three-phase project.
“For phase one, we plan to start this spring to be open and fully operational by spring of 2023,” he said. “It is our goal to refurbish and possibly add lodging to the current Longbranch structure. Also, in working with JPJ Engineering, we hope to add a sewer lift system to connect our property to the city sewer.”
He added that a sewer structure will be developed for future growth on the property.
“We also want to build two shower houses and one sleeper cabin and produce roughly 40 spaces for RV sites,” Brown said.
Phase two will add to the new development.
“We will take 15-20 of the RV sites and turn them into sleeper cabins that house two to six guests with a single bathroom,” he said.
“Phase three, which we plan to have open in 2025, will include the addition of three to five full-size cabins and possibly an events center,” Brown said.
“We are looking for as much support as possible from our community leaders in the state grant program and IRRR (Department of Iron Range Resources and Rehabilitation). We are looking forward to bettering our property and working with the community in Winton and Morse Township.”
Brown made clear that the new development will not impede on any of the events and activities that have occurred over recent years at the Longbranch property.
“We hope to enhance all those experiences such as trying to bring back a blues festival during (Blueberry/Arts Festival),” he said. We want to bring back some fishing tournaments and keep the water cross event going and have more community involvement.”
He noted that snowmobile trails will remain on the property and the beach will be open to the public.
“We are looking to enhance everything that’s there,” he said.
The Ely-Winton Rod and Gun Club retains the rest of their 66-acre property and the organization will continue its activities, according to Brown.
What is Travail?
According to a Twin Cities restaurant publication, Travail began about 10 years ago as a neighborhood restaurant where the chef/owners were doing something rare at the time, serving everyone themselves. The idea caught fire and suddenly there were lines out the door.
Soon, the owners Mike Brown, Bob Gerken, and James Winberg, who would come to be known as the “Collective,” launched an online campaign to raise funds for a new location. By 2018, the collective had outgrown its second location. In the intervening years, there has been a launch of a wildly successful pizza restaurant that’s now also a brewery.