KUGLER TWP— The pre-cast walls and roof are up and the new St. Louis County public works garage here will soon be fully enclosed so crews can begin interior work perhaps ahead of the new year. … 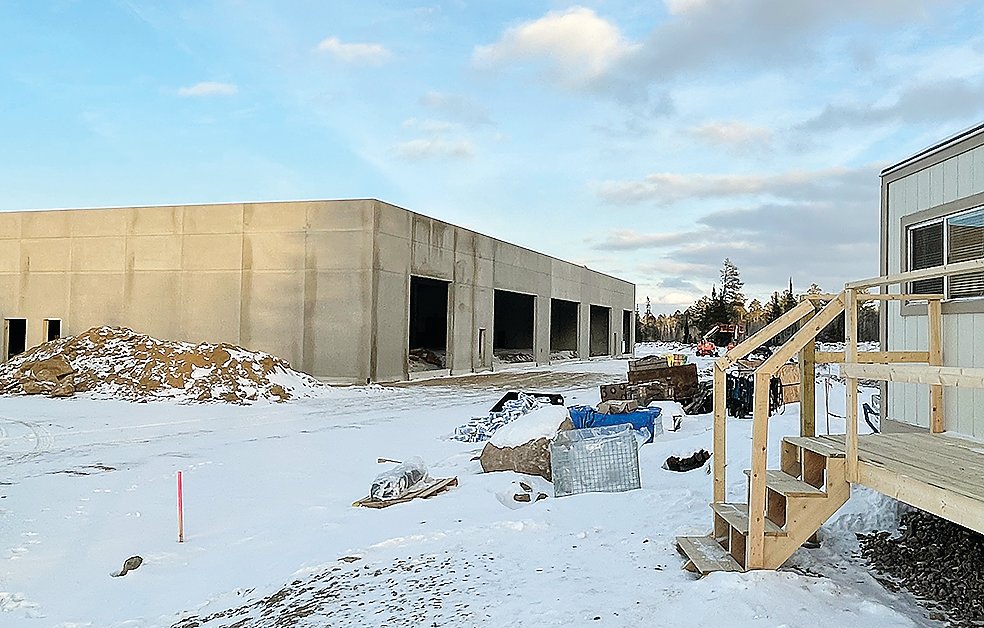 The walls and roof are up on the new county garage now under construction in Kugler Township.
M. Helmberger
Posted Wednesday, December 7, 2022 7:34 pm

KUGLER TWP— The pre-cast walls and roof are up and the new St. Louis County public works garage here will soon be fully enclosed so crews can begin interior work perhaps ahead of the new year.
The new facility, which is tucked into the woods near the intersection of Hwy. 135 and County Rd. 26, will replace existing county garages in Tower and Embarrass once it’s ready for operation sometime in the late summer of 2023. According to Chad Skelton, fleet and property manager for county public works, the new garage will house existing staff from the Tower and Embarrass garages and will include a supervisor along with the eight workers currently based out of the two facilities. Skelton predicts the new garage will be largely completed by late spring of 2023 and he expects crews to move in by mid-to-late summer. It should be fully operational ahead of next winter.
With much of the materials ordered and remaining work bid out, Skelton said it now appears the construction cost will come in right around $10.7 million. That’s considerably more than the $8 million original engineer’s estimate but is slightly less than the $11 million county officials were anticipating earlier this year when material prices were rising sharply. That estimate included some contingency dollars that Skelton said he’s now hoping won’t need to be spent.
As progress continues on the new building, county officials have been working towards a possible purchase of the existing county facility in Tower by the city. Skelton said he expects to have an appraisal of the facility completed later this month, which will form the basis for negotiations between the county and the city.
“We’re not looking to make money on it, but the county is looking for a fair price,” said Skelton, “recognizing that we’re dealing with a local government.”
Most of the buildings at the current county facility, located just off Marina Drive, on the city’s west end, were built in the 1990s and appear to be in good repair. Between the main office and repair facility, the cold storage warehouse and a 10,000 square-foot salt dome, the facility would provide the city with over 19,000 square-feet of indoor space, including 4,700 square-feet of heated space in the main office and repair garage.
Currently, the city has approximately 4,080 square-feet of heated space for its fire and ambulance service and public works combined. The city also has approximately 5,500 square-feet of cold storage in two dilapidated metal pole buildings, both of which were built in the first half of the 1980s.
City officials in Tower briefly discussed the possible purchase of the facility during a budget session on Monday. Tower Mayor Dave Setterberg said this week that he expects the possible purchase of the facility and accompanying acreage to be on the city agenda at an upcoming council meeting.
Skelton said the Embarrass garage, which is among the oldest county garages still in operation, will likely be sold for whatever anyone is willing to pay for it.