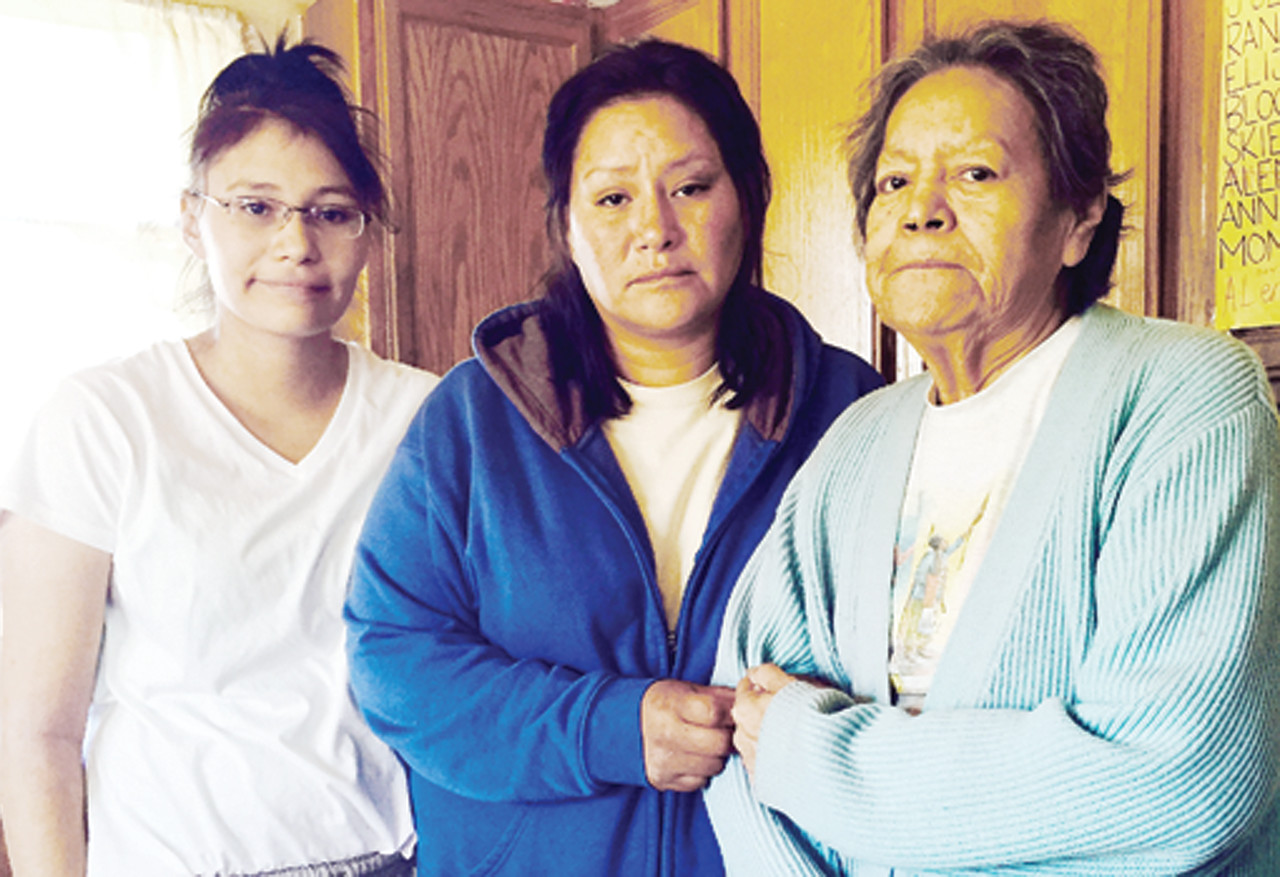 REGIONAL— A trip to North Dakota last month turned into a devastating week-long ordeal for a Lake Vermilion woman who says she was abducted and transported to the Bakken oil patch, possibly as part of a human trafficking ring.

Edith Chavez had traveled to Mandan with her ex-boyfriend, Anthony Delaney, but when the two argued on the trip, she said Delaney beat her and left her in Valley City, about 60 miles west of Fargo. She made arrangements to meet an aunt in Fargo and started hitchhiking east, where she hoped to get a ride back home. But 35 miles later, in back of a gas station in Casselton, a man grabbed her and knocked her unconscious.

“He picked me up right off the ground,” said Edith, “He was very strong and I couldn’t get away. There was a white flash and then I don’t remember.”

The man had snuck up behind her while she was messaging friends and family members on her progress and was focused on her laptop computer. It was the last message her family would receive for almost a week.

The following few days, she said, are lost in a fog, as her abductor may have kept her drugged. She woke up to the dinging of an open car door, and found herself lying in the backseat of a beat-up Honda Accord with a missing back window. With her abductor apparently outside the vehicle, she stumbled out of the back seat and crawled away. “I tried to run,” she said, but her vision was blurry. Despite that, she managed to make her way down a steep ditch and her abductor apparently didn’t pursue her, but her memory of her escape is far from clear.

While she had managed to evade one threat, the next one soon became apparent. For one, she was severely dehydrated and badly bruised from her encounter. “I remember my lungs aching. At some point I passed out, I’m not sure for how long,” she said.

While she had begun her ordeal in Casselton, in far eastern North Dakota, after escaping her abductor she found herself in a remote part of northwestern North Dakota. She said she wandered for at least two days, without food or water, before finally being rescued by a North Dakota man, who spotted her wandering across open country near the tiny town of Wildrose.

As Edith faced her trials in North Dakota, her family back home on Lake Vermilion became increasingly worried at the lack of contact. Edith had typically called or used Facebook frequently to communicate with family, but her postings had abruptly stopped after her last posting in Casselton on April 5. Her sister Ladonna spread the word of her sister’s disappearance on Facebook and to law enforcement around the region. “I’m talking with the Casselton PD, Duluth PD, Nett Lake PD, Tower PD… next is Minneapolis PD and so forth,” Ladonna posted on her Facebook page. “If you’re out there sister, PLEASE CALL!!”

Ladonna attempted to message Edith on Facebook, but her abductor had apparently deactivated her Facebook page. “Now I have no way of getting ahold of her,” Ladonna lamented in another Facebook posting.

When Edith missed calling her son on his birthday, the family knew she was in trouble. “She never misses at least calling on birthdays,” said Edith’s mother Jackie Chavez.

The family made call after call to law enforcement officials and sent photos of Edith in hopes they could find her. An investigator in Casselton, Steve Gabrielson, did file a missing persons report and responded to phone calls from Edith’s family. But he was mostly the exception, according to Ladonna, who said few of the police officials they contacted took their concerns seriously.

The man who found Edith brought her to his rural residence, where members of his family helped her clean off dried blood and dirt and allowed her to call home. The phone call came as a huge relief to Edith’s family members back on Lake Vermilion. “I wanted to cry when I was talking to her I was so happy to hear her voice,” said Ladonna. On Facebook, she described Edith as “a little shook up and scared and lost.”

Before hanging up, Edith told Ladonna that the man who found her had offered to take her to Williston, where she intended to report her abduction to police. The abduction of women in North Dakota, primarily for sex trafficking, has become an issue of critical importance in recent years, as the oil boom took hold in western North Dakota. A flood of mostly male oil workers, combined with hefty wages and limited spending opportunities has sparked a major increase in both the drug and sex trades. While some women participate willingly in the North Dakota sex trade, others, including many American Indian women from both North Dakota and Minnesota, have been forced into the trade, sometimes through abduction.

While Edith had hoped her experience would help law enforcement officials apprehend a kidnapper and possible human trafficker, she soon discovered that officers at the Williston Police Department had little interest in her story. She said officers refused to take a statement about her abduction. Instead, they ran her own record and found a 2011 traffic violation from Grand Forks still outstanding—and arrested her on a bench warrant for the unpaid ticket.

“I kept trying to tell them that I’d been taken, but they wouldn’t listen. One officer told me I was full of __it and was just trying to get out of the warrant,” said Edith.

According to Edith, the Williston police offered no medical assistance. Instead, they booked her into a holding facility overnight and shipped her to a jail in Minot the following day.

When contacted by the Timberjay, Williston police initially denied having any record that Edith was ever in their custody. Lt. Randy Haugenoe suggested that Edith was mistaken and that she may have confused the police department with the Williams County Sheriff’s Office. The sheriff’s office, which operates the holding facility where Edith spent her first night in custody, found a record of Edith’s visit there, but referred the Timberjay to the Williston holding facility for more information. There, an on-duty sergeant confirmed that Edith had been jailed there on a bench warrant— and also confirmed that she had been arrested by an officer of the Williston Police Department.

When confronted with this information, Lt. Haugenoe acknowledged that he did have a record of Edith, but refused to provide any answers to questions about her claims of abduction or her physical condition at the time she entered the offices of the Williston police. “But there is no record that she was drugged or beaten,” he said.

Similarly, officers at the Williston holding facility said their medical survey form, which they complete for every incoming prisoner, also indicated they saw no bruising or other physical ailments worth noting.

Yet the next day, in Minot, corrections officials finally recognized that Edith was in significant distress. Rather than keep her incarcerated, a female corrections official got Edith’s charges dismissed and released her with directions to the nearest hospital. There, doctors diagnosed Edith with a concussion and severe dehydration.

Edith said her experience with North Dakota law enforcement officials left her disoriented all over again. “I felt like I was dead,” said Edith. “I would talk, but it was like they couldn’t hear me. I kept telling myself to wake up.”

Meanwhile, back at home, Edith’s family was again concerned as the hours passed without further word from her. Ladonna called the Williston Police Department, where she said officials were unhelpful and even rude. “They wouldn’t even talk to me. They hung up on me,” she said. “They wouldn’t help her at all.”

Finally, they heard from Edith after she had limped to the Minot hospital. After a day spent there recovering, a friend from Duluth traveled to Minot to bring Edith back to Minnesota. After an unproductive stop in Casselton to look for Edith’s computer and bags at the gas station where she’d been grabbed, the two arrived back home on Lake Vermilion on April 16, eleven days following her initial abduction.

Meanwhile, the search for Edith’s captor is stuck in neutral. In Casselton, Detective Garbrielson said he had hoped that security cameras at the gas station might have recorded some of the abduction, but the cameras don’t cover the area behind the station, where Edith said she was taken.

“The cameras don’t reflect anything,” he said. While Gabrielson said he doesn’t doubt that Edith went through a traumatic experience, “what it was exactly and where it was, we’re not sure of,” he said. “We’re looking into it, but we don’t have many leads.” But some investigation is ongoing, and a Minnesota investigator, working on another case of a missing woman, recently visited the Chavez home with additional questions.

The knowledge that Edith’s kidnapper is still out there is among the biggest frustrations for Edith and her family. “Who knows what he would have done to me if I hadn’t woken up and escaped,” said Edith. “And who knows who else he’s done this to,” she added.

It’s such thoughts that have continued to stalk Edith, particularly at night. “She keeps picturing her abductor and it scares her,” said her mother Jackie. “Sometimes she wakes up screaming.” She’s currently staying with a friend in Virginia as she waits for an opening in a group home setting, where she can hopefully get help in her mental and spiritual recovery from her devastating experience.

The spelling of the Williston lieutenant's name was incorrect in the original version of this story. It has since been corrected