Co-owner Nina Wycoff following in the footsteps of her mother 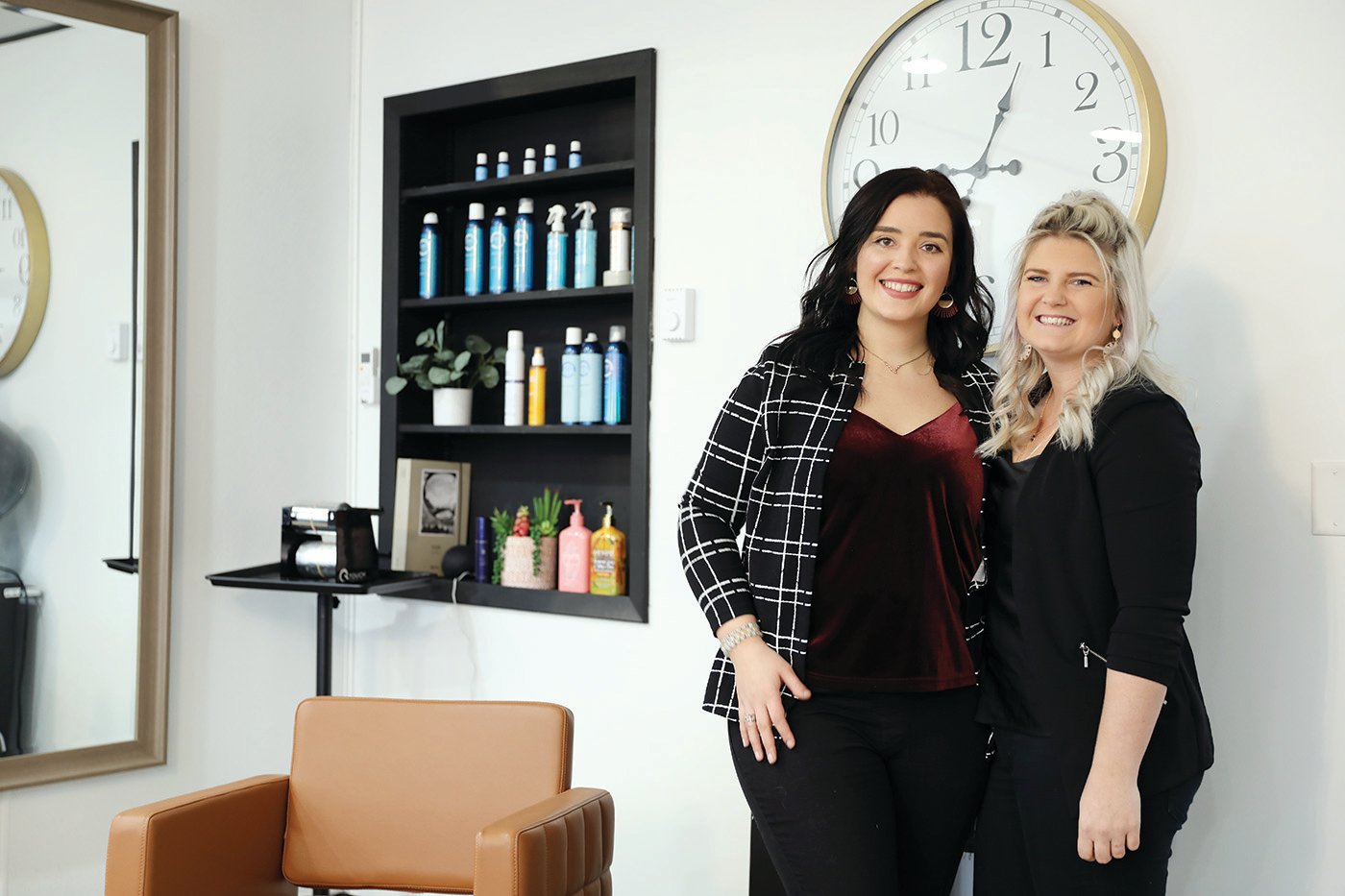 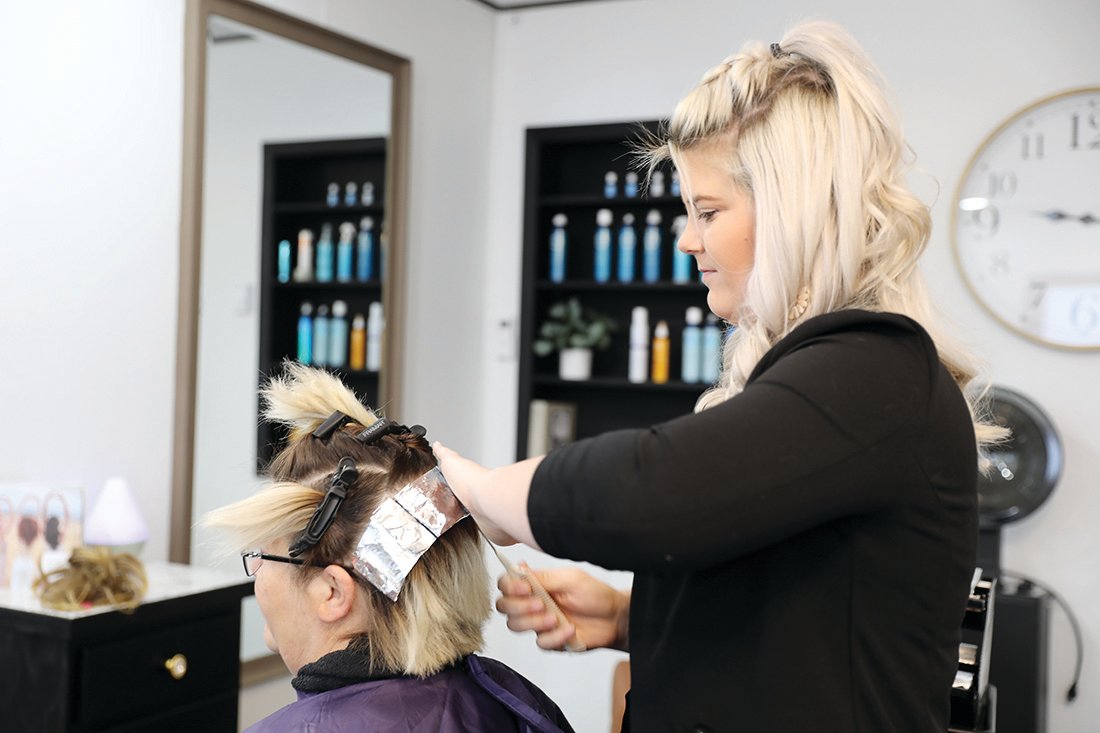 Nina’s first customer was her mother, Bonnie Overton, who used to have her own salon in Tower.
J. Summit
Previous Next
Posted Wednesday, December 7, 2022 7:19 pm

TOWER- They may be young, but these two women are bringing over a dozen years of experience to their new salon now open on Main Street. After working side-by-side at a salon in Virginia, 20-somethings Nina Wycoff and Katie Erickson have opened up their own business in Tower.
Nina (Helgerson) Wycoff is no stranger to Tower. Her mother, Bonnie (Theel) Overton, ran the La Bella Vita Salon in Tower for six years before having to close it due to some ongoing health issues. That salon location is now operated by Leanne Barsness.
“Nina wasn’t ready to take it over when I had to close,” said Bonnie, who was simply beaming with pride as her daughter sat her down in the salon chair for a color touch-up.
“I grew up in this business,” said Wycoff, who also worked at The Tower Café while in high school. “The first haircut I ever gave was to Gary the barber.”
Katie Erickson said she was drawn to a profession where she couldn’t be replaced by technology.
“Plus,” she said. “I figured you could find a job anywhere.”
Erickson was that go-to friend in high school, the one who would do your hair and makeup for prom, or just show up early with a curling iron to do a friend’s hair before classes started.
The two are keeping the business family-related on their first day.
“My dad is my first appointment on Tuesday,” said Erickson, and Wycoff will be doing her mother Bonnie’s hair for her first appointment. While they are both booked solid for their first week, plenty of appointments are available in the next few weeks.
The two met while working at the Laurentian Divide Salon and realized how well they worked together when taking on wedding party jobs.
“They are really high stress,” said Erickson, “and we did so well together.”
“I am so proud of both of these girls,” said Bonnie. “They are a great team.”
Wycoff, who has two young children, was ready to begin building her own business, but it was something she was reluctant to do on her own. She and her new partner figured they had the skills and newly built experience to open their own salon and build their own clientele.
The salon is located in the former South Shore Creamery building, which was renovated and opened for business two years ago by Tim and Brittany Bastron. But the difficulties in running a seasonal business while living out of town, along with an almost doubling in the wholesale cost of ice cream, had them looking to rent out their retail space.
This came right at the time Wycoff and Erickson were deciding where to locate their new salon. They had earlier decided not to locate near their former employer in Virginia, and Wycoff said Tower was high on their list of possible locations. The two were also excited to see other new businesses opening up in Tower, so they decided to land here.
With lots of help from Katie’s father Bruce, a retired carpenter, and Nina’s husband Jack, who also has plenty of construction experience, the pair has turned the former ice cream parlor into a peaceful looking two-chair salon, with a private treatment room available for facials, waxing, and soon massage, which will be available by appointment.
They both have a keen desire to make their salon professional and welcoming. They said they go that extra-mile with their clients, listening to their needs, making sure they really understand what hairstyle they are looking for, and keeping them relaxed.
“When one of my clients falls asleep during a facial,” said Erickson, “I know I have been doing a good job.” Erickson said facials include a hand and foot massage. They both add in a scalp massage before a haircut.
The salon is not offering manicures and pedicures, because Harbor View Spa in Tower is now offering those services.
While there are already two existing salons in Tower, they both said there are still plenty of customers around for all three to stay successful.
The salon also is selling hair care products from Milkshake and Oya.
Services include cuts and styles for both men and women, color, facials (several types including peels, masks, and cleansing), and waxing.
Northern Lights Salon & Co. is located at 409 Main St., Tower. Hours are 10 a.m. – 6 p.m. Tuesday through Thursday, 10 a.m. – 5 p.m. Friday, and by appointment on Saturday. The two are also taking appointments for wedding parties and other special events. For appointments or more information, call 218-244-0302 or visit www.northern-lights-salon.com to book online. Follow them on Instagram (@northernlightssalonco) and Facebook for further updates.