REGIONAL— The U.S. Fish and Wildlife Service (USFWS) announced a final rule last week that reclassifies the northern long-eared bat from its earlier threatened status, to endangered. According … 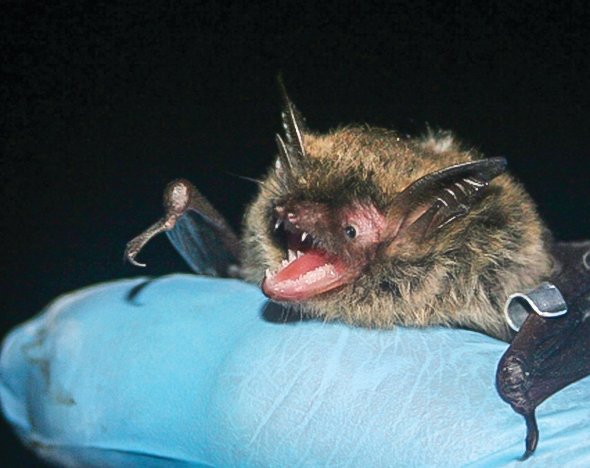 A researcher holds a northern long-eared bat, a species now on the verge of extinction in much of its range due to white-nose syndrome.
Posted Wednesday, December 7, 2022 7:24 pm

REGIONAL— The U.S. Fish and Wildlife Service (USFWS) announced a final rule last week that reclassifies the northern long-eared bat from its earlier threatened status, to endangered. According to the USFWS, the long-eared bat has experienced the almost total collapse of its wild populations throughout its U.S. range due to the deadly fungal disease known as white-nose syndrome. The fungus is named for the whitish fungal growth that develops around the mouth and nose of infected bats.
The forest-dwelling northern long-eared bat was common in northeastern Minnesota as recently as ten years ago, but populations in the region have plummeted since the arrival of the fungus that causes white-nose syndrome. The fungus attacks bats in their winter hibernacula and it has devastated bat populations in places such as the Soudan Mine, which used to be the winter home to an estimated 10,000-15,000 bats. Northern long-eared bats used to make up about five-to-ten percent of that population, but by 2019, DNR biologists reported finding not a single long-eared bat in the mine.
The few remaining bats in the mine were almost exclusively little brown myotis, otherwise known as little brown bats, which appear to have slightly more resistance to the fungus than the northern long-eared. The sensitivity of the northern long-eared bat to the fungus has been known since shortly after its discovery in New York state in 2006. The fungus has since spread to more than 35 U.S. states and several Canadian provinces, devastating bat populations as it’s done so.
The reclassification of the bat to endangered reflects the changing circumstances of the bat species and the understanding of researchers about its current peril. The bat was first declared threatened in 2015, but since then, the impact of white-nose syndrome on the species is better known. Winter data from 27 states and two provinces indicated that white-nose syndrome has caused population declines of 97-100 percent across 79 percent of the bat’s entire range.
The new rule takes effect on Jan. 30, 2023, but it’s impact on area timber producers should be less than some had initially feared. While the bat species winters in caves and underground mines, it lives and breeds during the summer in hollow trees or underneath loose flaking bark. In northeastern Minnesota, the bat is often found breeding in older aspen which had initially raised fears that a conservation plan could significantly impact timber producers who typically target aspen for harvest.
Yet, it appears those concerns have mostly been addressed. According to Ray Higgins with the Minnesota Timber Producers, the USFWS is expected to approve what’s known as a Habitat Conservation Plan, or HCP, affecting Minnesota, Wisconsin, and Michigan, in mid-January, before the new rules take effect. Under the draft HCP that’s been developed by the three state’s DNRs and the USFWS, with significant input from timber producers, loggers will still be able to conduct their operations with relatively minor restrictions designed to protect a very limited number of known maternity roosts. “While we’re disappointed about the situation with the bat, we feel good about our ability to do our work,” said Higgins. “Practically speaking, the uplisting is not going to be a significant hindrance, thanks to the work on the HCP and we have appreciated having had the opportunity to partner on that.”
The three lakes states aren’t alone in that work. Since the northern long-eared bat was listed as threatened in 2015, Fish and Wildlife has approved more than 22 HCPs that allow wind energy and forestry projects to proceed after minimizing and mitigating their impacts to northern long-eared bats.
During the summer months, northern long-eared bats have long been a major consumer of flying insects in northeastern Minnesota. They emerge from their hiding places at dusk and catch insects like moths, mosquitoes, flies, and beetles in the forest understory.
The prospect for recovery of the northern long-eared bat remains unclear. Prior to the arrival of white-nose syndrome, bats were considered relatively long-lived species and are relatively slow to reproduce. A female bat typically raises no more than a single pup per year, making any population recovery a very long-term process, even without the presence of a deadly fungus in their environment. But USFWS officials are hoping Tuesday’s announcement will be a step in the right direction.
“This listing is an alarm bell and a call to action,” said U.S. Fish and Wildlife Service Director Martha Williams in a press statement.