VERMILION RESERVATION- “Bazhidebii” is a word in Anishinaabemowin that means “it overflows,” according to The Ojibwe People’s Dictionary, and it’s an apt … 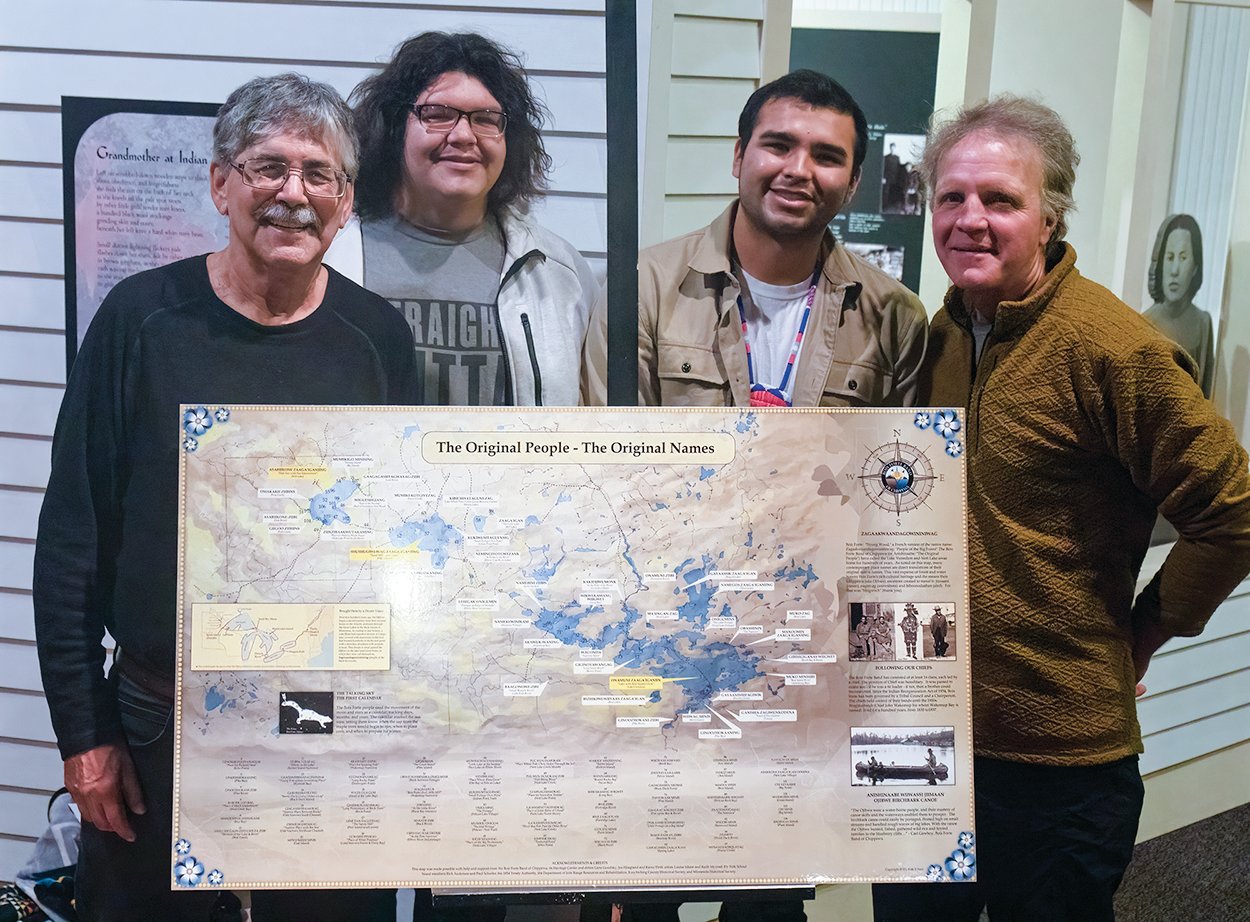 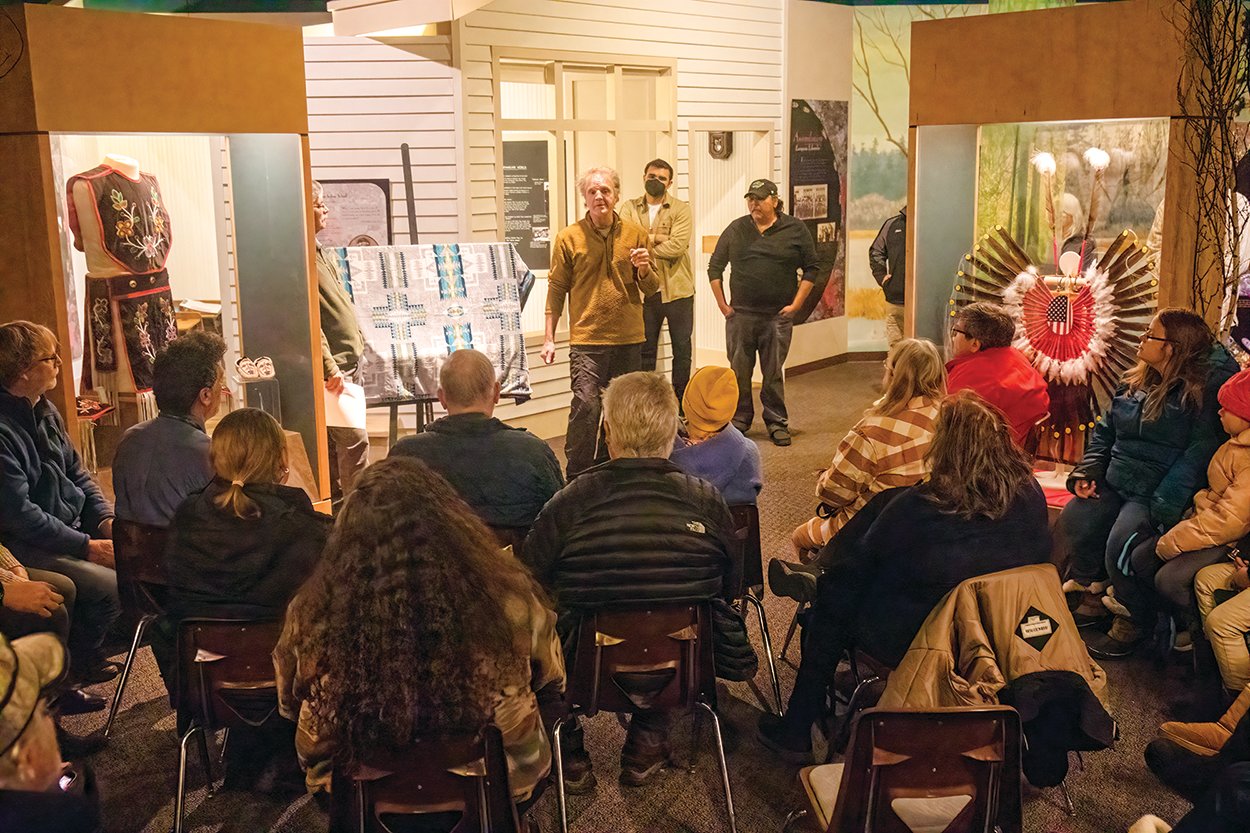 VERMILION RESERVATION- “Bazhidebii” is a word in Anishinaabemowin that means “it overflows,” according to The Ojibwe People’s Dictionary, and it’s an apt descriptor of the turnout last week at the Bois Forte Heritage Center & Cultural Museum for the historic unveiling of a new map that restores over 100 original Ojibwe names to a 100-mile expanse of boreal forest from Lake Vermilion to Nett Lake.
A crowd of around 100 people far exceeded the available seating capacity on Nov. 30, as a broad spectrum of Band members, representatives of regional organizations, media, and other interested parties crowded together to view the stunning map designed by Bois Forte artist Louise Isham and crafted on a hand-painted historic template by artisanal map maker Keith Myrmel.
The two-year project, a collaboration between the Bois Forte Band and the Ely Folk School (EFS), involved extensive research to identify the original names for places such as Gagons-ibi-madage-winik, which in English means “place where the young porcupines live” and is commonly known as Bystrom Bay. Interviews with Band elders augmented historical written resources that included diaries of anthropologists and missionaries from Smithsonian archives, a 1922 roadless recreation area proposal (that led to today’s Boundary Waters) by landscape planner Arthur Carhart and his Bois Forte colleague Leo Chosa, and geologist Warren Upham’s “Minnesota Geographic Names.”
Bois Forte Band member and EFS board member Rick Anderson served as the event facilitator and introduced fellow EFS board member Paul Schurke as a “driving force” in the map’s creation. The Timberjay asked Schurke for his reactions to the event.
“It’s just wonderfully gratifying response today that gives this whole project meaning to see all the interest in the map, and the interest in regaining this potentially last piece of our region’s rich culture, the Native names,” Schurke said. “That’s quite a punch for those of us who have spent the last few years putting this together. Now, it’s reality. And now with the 100-plus people here today and all the media interest in the project, clearly, it’s gaining traction to take on a life of its own and build and grow from this.”
Heritage Center Director Jaylen Strong said his work with the project included many conversations with Bois Forte Band elder and spiritual adviser Gene Goodsky before he passed away last February.
“I’ve heard so many others talk about different locations, or the path to get up between villages, and I always kind of wondered, well, how do you tell where you’re at?” Strong said. “They talked about how they used to have these place names, about the stories of what occurred there, and that’s where they got the name from. Now we have a physical copy where you can see these place names. You can go out there and know that this location has its name and keep that kind of history alive and memory alive.”
Several staff members from the U.S. Forest Service LaCroix and Kawishiwi district offices were in attendance, and Kawishiwi District Ranger Aaron Kania offered his thought about the significance of the map.
“This isn’t the past for the Ojibwe people, this is their present,” Kania said. “For the Ojibwe, this never went away. This has always been, and now this map is reminding people of this other lens to view this landscape through. This reminds those who use public lands that there are many ways to see this landscape.”
Kania describe a personal experience in connection with Ojibwe place names while talking with an Ojibwe elder during the Bezhik fire in May 2021.
“He showed me on the map that Bezhik means ‘one’,” Kania said. We looked at the forest service map and the lakes were numbered one, two, and three in Ojibwe. What a powerful moment to think that here we are managing fire on this landscape that fire has been managed on for a long time. To have that Native voice present during that fire was really helpful to tie into that history.”
It’s an example Kania said emphasizes the unique relevance of the new Ojibwe place names map by not only connecting with history, but by connecting the present to the present.
Copies of the map’s first limited edition printing were to be made available through an Ely Folk School fundraiser for a donation of $100 or more. The map will be for sale to the general public at EFS and Bois Forte Heritage Museum sometime in January.