ORR- There’s an age-old proverb that goes, “Too many cooks spoil the broth,” but a good look at the sharp looking new vehicle in the Orr Ambulance Service garage suggests this … 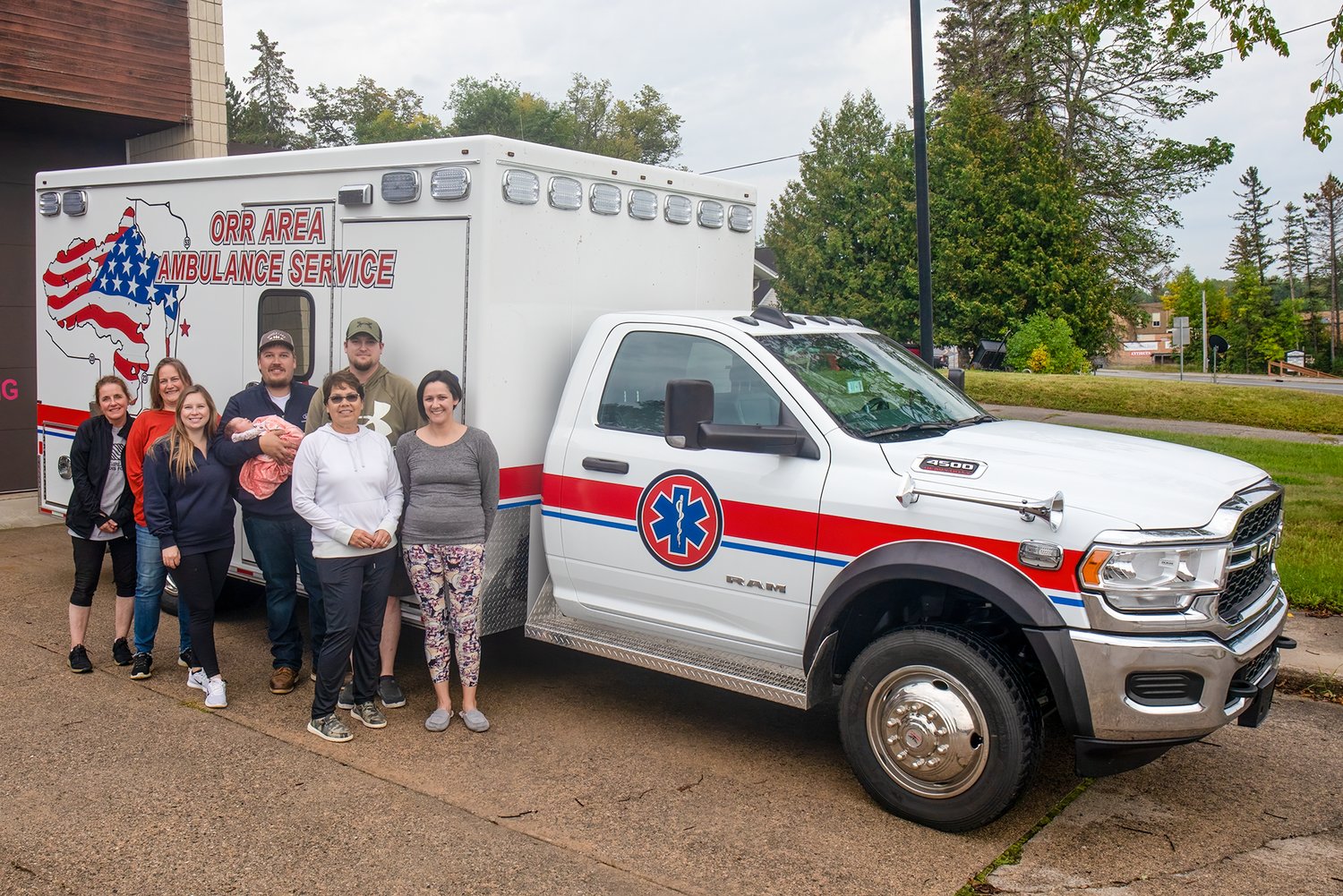 Members of the Orr Ambulance Services proudly show off the replacement for their nine-year-old ambulance, a brand-new unit that will improve patient and EMT experiences.
D. Colburn 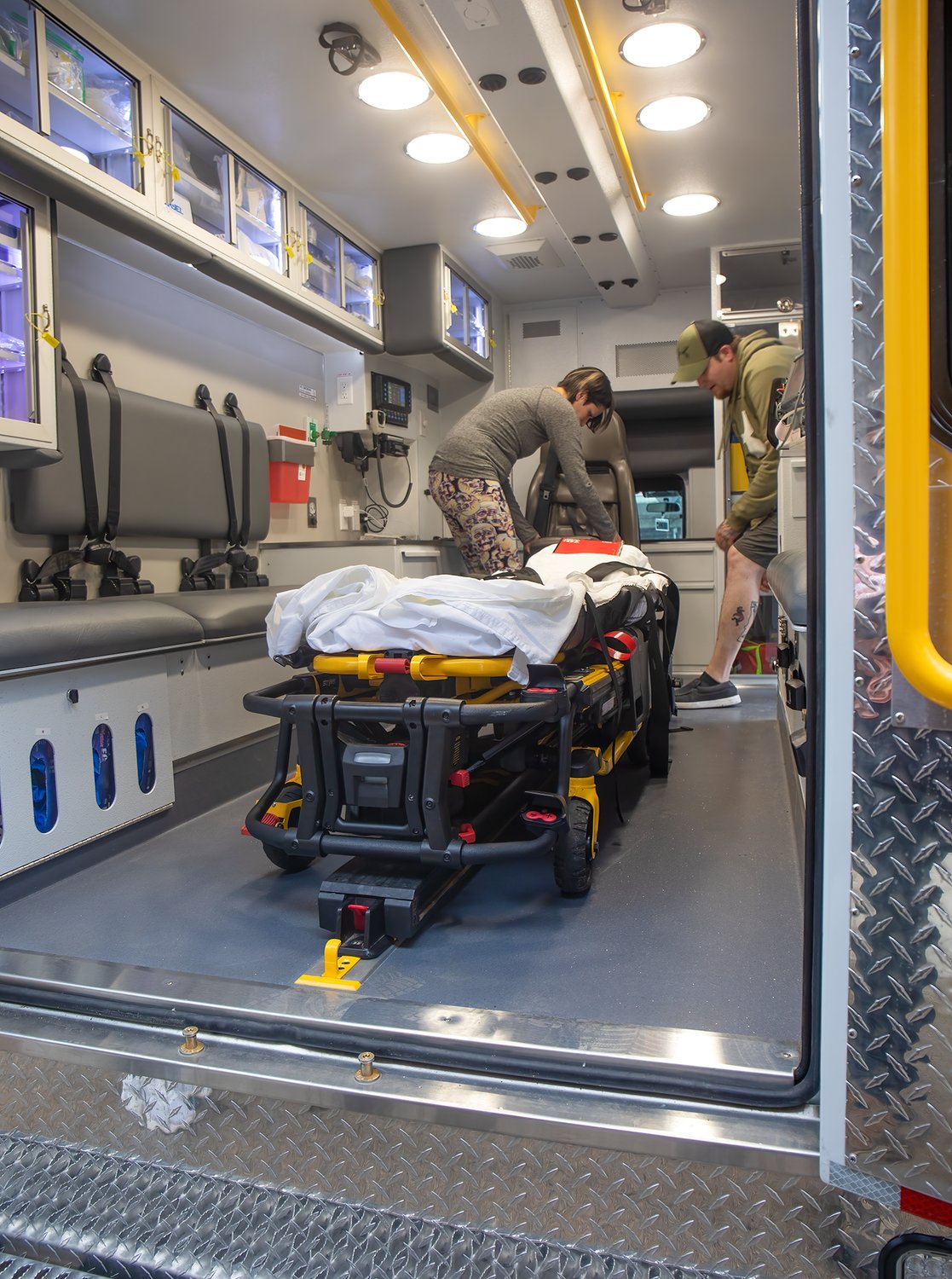 The extra room provided by half-depth supply cabinets creates more room to move for EMTs as they're attending patients. Clear Plexiglas and LED lighting provide a clear view of everything stowed in the cabinets for quick access to needed items.
D. Colburn
Previous Next
Posted Wednesday, September 21, 2022 5:16 pm

ORR- There’s an age-old proverb that goes, “Too many cooks spoil the broth,” but a good look at the sharp looking new vehicle in the Orr Ambulance Service garage suggests this particular group of cooks got the recipe just right.
The service recently received the brand-new ambulance they’ve been waiting months and months for, and the crew member who spearheaded the design work, Patrick Hoffer, was quick to note that special configuration tailored to their specification was a total team effort.
“Everyone had input into this,” he said.
But every project needs someone to guide it, and Hoffer took on that role, making contacts with other services, researching suggested options online, and developed the final specifications that went into creating a redesigned box that has benefits for patients and EMTs alike.
The ambulance, built by Braun Northwest, features a more spacious patient transport area on a 2022 Dodge Ram 4500 diesel chassis with four-wheel drive, making it the service’s go-to ambulance for all kinds of weather. But Hoffer didn’t start completely from scratch.
“Thanks goes to Hibbing Fire Department because this is based off their ambulance,” Hoffer said. “Hibbing, Eveleth, Orr and Nashwauk now all have similar ambulances. It’s becoming popular because there’s a lot of room. This whole thing was built not only around patient care but EMT safety.”
The immediately noticeable difference from the nine-year-old ambulance this one replaces is with the cabinetry used to store medical supplies. While the old unit had full-depth cabinets, the new one is equipped with half-depth cabinets.
“What we found is that with our storage, while we had a lot of it, it really wasn’t utilized. We had a lot of small things in big cabinets,” Hoffer said.
The extra space provides more room for better access to patients and easier mobility for EMTs, Hoffer said.
The cabinets in the old units also had tinted Plexiglas that, coupled with the depth, made finding specific items difficult. The new cabinets have clear Plexiglas and LED lighting so that EMTs now have a clear view of everything they need, and greater ease of inventorying supplies is another benefit.
“We’re all volunteers – we don’t run 400-500 calls a year,” Hoffer said. “It just makes it that much easier for all of us to know we can go into those cabinets and know where everything is because we can see it.”
The Wall Street Journal reported last year that the average age of passenger vehicles on the nation’s roads was 12.1 years, but the nine-year-old Orr ambulance was already two years past the recommended replacement schedule of seven years. But because it didn’t have the same wear and tear as higher use units, the Orr service got a pleasant surprise in the form of a $45,000 trade-in value that significantly reduced the original $235,000 price tag.
“That helps us immensely with our budget. That trade basically will allow us to replace that LIFEPAK back there,” Hoffer said, motioning to the high-tech defibrillator/heart monitor unit.
And while Hoffer and the rest of Orr’s crew aren’t looking for excuses to take the new rig on the road, when they must roll, they’ll do so knowing they have a new edge in providing the best emergency care they can.
“For any of our super severe patients, or cardiac arrest patients, or severe trauma patients, this thing is going to be top notch,” Hoffer said.