REGIONAL— A regionwide drought that intensified dramatically in July is showing no signs of easing so far in August, even as more southerly parts of the state received some relief this past … 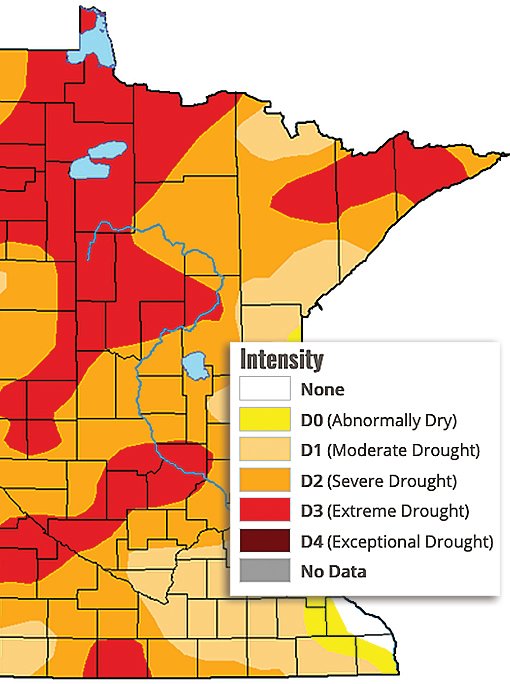 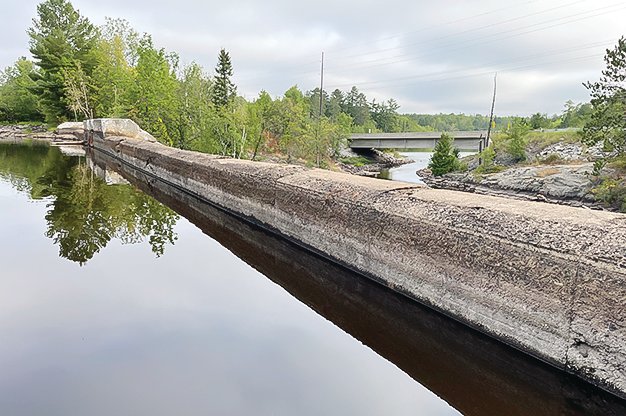 he backside of the Pike River dam shows the water level down at least four feet from the lip of the dam.
M. Helmberger
Previous Next
Posted Wednesday, August 11, 2021 6:06 pm

REGIONAL— A regionwide drought that intensified dramatically in July is showing no signs of easing so far in August, even as more southerly parts of the state received some relief this past weekend. Much of the North Country has seen almost no rain over the first ten days of the month, a period when the region would have normally seen close to an inch and a half.
It’s all compounding a moisture deficit that has been building all year. Places like Ely and Embarrass are among the hardest hit areas locally. On average, Ely should have received about 17.5 inches of total precipitation since the first of the year. Yet as of this week, the area had seen just 8.43 inches, or just under half of its long-term average. It was much the same story in Embarrass, where the official weather observer, Jack LaMar, has recorded just 8.85 inches as of this week.
“It’s grim,” said Chuck Neil, who lives a few miles from LaMar and says he’s seen a bit less than his neighbor down the road. “I’ve had a garden for 44 years in a row and this is the driest it’s ever been in that time,” he said. “I’m glad I’m retired because I need to water the garden all the time. Otherwise, we’d be in real trouble.”
The worsening conditions prompted the U.S. Drought Monitor to designate extreme drought across a wide band through northern St. Louis, Lake, and Cook counties. Most of the rest of the county is listed in severe drought, while the far southern and far northern parts of St. Louis County are in moderate drought.
The continued lack of rainfall has pushed river and streams to astonishingly low levels. The Vermilion River, which flows from Lake Vermilion to Crane Lake, would typically see water flowing at about 350 cubic feet per second, (cfs), in early August. But as of this week, the flow was down to a mere trickle at 33 cfs, a decline from the 48 cfs reported the week before.
Ed Tausk, who co-owns and operates Vermilion Dam Lodge said a little water is still coming over the lip of the dam. “I’ve seen it this low before, in late fall, but never this early in the season,” said Tausk. “There’s just a limited amount of water flowing over it right now so definitely at some point, if we don’t get rain, it will stop flowing.”
The Little Fork River has seen its flow fall from a similar 350 cfs this time of year to just 36 cfs as of this week. Those flows are recorded weekly by the Department of Natural Resources. The Basswood River was down to just 145 cfs, or far below its typical August flow of 940 cfs.
The low water likely isn’t affecting the area’s fishery, according to Edie Evarts, who served as Tower DNR area fisheries supervisor for the past ten years.
While the conditions in most area rivers may not be suitable for most fish, Evarts noted that fish are mobile and will seek out better habitat when stressed by low water or low oxygen. That could mean finding deeper pools or leaving rivers altogether by making their way to lakes that might be connected.
“Where they can run into problems is when they run into dams,” said Evarts, which can block a fish’s ability to move to better water.
The lack of rainfall is also impacting lake levels, such as on Lake Vermilion. “There’s more beach property than ever on the lake this year,” said Rob Bryers, who grew up on Vermilion and now guides anglers on the lake. “I can’t remember the water ever being this low,” he said.
Evarts said this summer’s heat and low water could begin to affect some fish species, like cisco, that require cold, well-oxygenated water. “I’m surprised we haven’t seen some cisco die-off this year,” she said.
But Bryers said the ciscos seem okay for now and he notes that water temperatures on the lake seem to have moderated recently, perhaps due to all the smoke in the air from Canadian fires, which reduced the amount of sunlight reaching the ground. “The water temperature on the lake never got as warm as last year,” said Bryers. “I’m sure all the smoke may have cooled things a bit.”