Training for the worst

Eagles Nest firefighters use simulations to improve their response effectiveness

Training for the worst

Eagles Nest firefighters use simulations to improve their response effectiveness 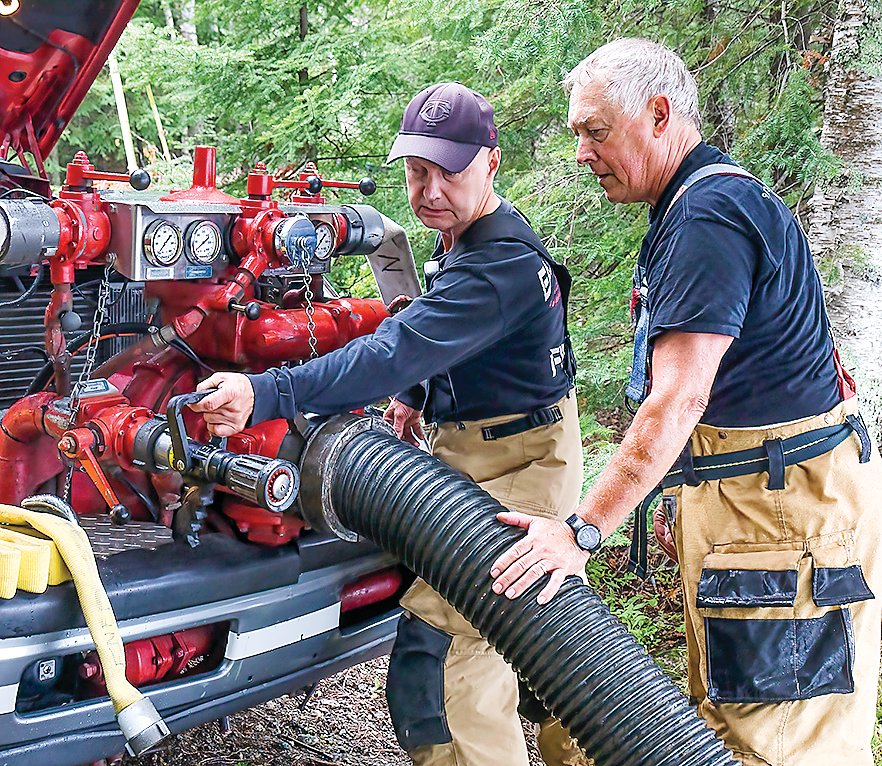 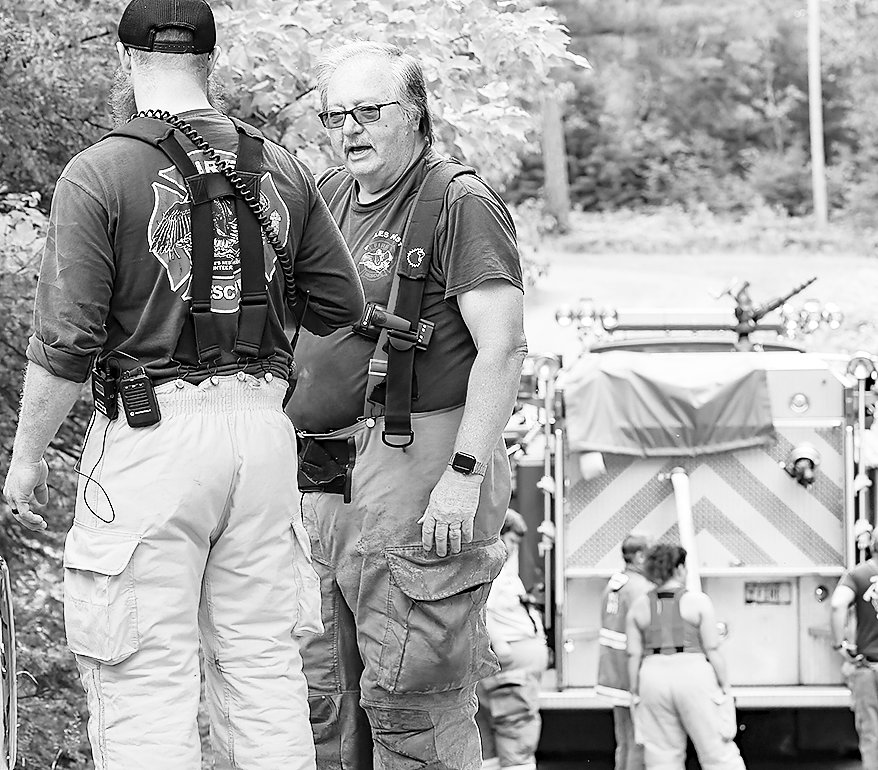 EAGLES NEST- Last Saturday’s simulated fire and evacuation exercises at Eagles Nest Lake 4, involving both Eagles Nest and Morse Fall Lake Fire Departments, turned out to be more than mere practice. The results of the exercise proved that a shift in tactics could significantly enhance firefighting success in some instances by reducing the time it takes to replenish tenders with water and get them to the site of a fire.
Last year’s simulation, which included more departments and a longer task list, may have been more involved, but this year’s establishment of a water source, using a local lake, was no less intense for those involved, township Emergency Management Director Mike Ostlund said Saturday.
Ostlund had also set up the evacuation scenario, and there was a twist to it. The premise was that cell phone service to the area was down, which meant that firefighters had to go door-to-door to notify Lake 4 residents to evacuate and verify that houses where there was no response were empty. Most residents actively participated in the evacuation, rendezvousing at the command center at the township hall.
Meanwhile, Eagles Nest and Morse Fall Lake firefighters put into action a plan that Eagles Nest Fire Chief Larry McCray had been working on for about a year.
“I’ve been looking for water access points,” McCray said. “We have only two dry hydrants for lake access, which doesn’t make sense to me. I thought, ‘I’ve got 11 lakes, I’ve got a lot of water. How do I get to them?’ The problem is that most of these lakes are surrounded by private property.”
McCray started approaching some of the homeowners and had about a dozen agree to let firefighters use their property if needed. If the property has soft ground or the potential access point is a mucky area they can’t pump from, those won’t work, McCray said.
“But where we find them,” he said, “we’re reducing traveling time and we’re increasing firefighting time.”
Drawing water directly from a lake for firefighting takes the tenders out of the mix, McCray said.
“A typical house fire is going to take at least 400 gallons per minute for about 45-60 minutes to extinguish,” he said. “The problem fire departments run into is that they can’t continuously flow that much water because they run out of water waiting for the tender to show up. Instead of hauling water from a point three miles away, I can draw water from the lake and I can concentrate more of my people on fighting that fire. I have access to all the water I will ever need to fight that fire instead of hauling every ounce of it down the road.”
Saturday’s test, conducted on West Lake 4 Rd., was to set up a pumper truck at the end of a narrow sloping 550-foot driveway with a steeper 20-foot drop in the final section down to the lake and pump the water back up the hill to an intermediary truck that then sent the water on to tenders from both departments. The tenders were just used to receive the 15,000 gallons of water pumped during the exercise. Had there been an actual fire at the location, the water pumped from the lake would have been deployed directly on the blaze.
McCray summarized the result during the post-event luncheon and debriefing.
“We have discovered just what we hoped, that we could draw water out of the lake in a timely manner and have plenty of water to fight the fire,” he said. “Our goal here today was to reduce that dead travel time by getting water from the lake, and it worked. This is going to become our new plan. We’re going to be able to draw water quicker, we’re going to have less down time, and we’re going to put it into action.”
The evacuation portion of the simulation also went well, but participants had suggestions to improve it.
St. Louis County Emergency Management personnel facilitated radio communications for the evacuation and made several recommendations that the township will implement, including headphones to help isolate calls from multiple radios and having “a plain old clock” where the operators are stationed for quickly being able to record call times.
Another issue with the evacuation was having adequate parking at the town hall for evacuees, particularly if a larger number needed to be evacuated.
It was also noted that the development of more lake access points will continue, and that there are obstacles to be overcome to do so.
“There are a number of areas in the township I worry about,” McCray said. “One of those is Bird’s Nest. Nobody’s heard of that road. It’s an old railroad bed and that road down through there is growing up because of a lack of traffic. But I have 13 lots and eight structures in there. That’s a disaster. We’d never get fire equipment down there.”
But with a new firefighting strategy in hand, McCray hopes to build momentum and find the funding over the next several years to further enhance the safety of Eagles Nest homeowners.