REGIONAL— A study of wolves in and around Voyageurs National Park has captured several seconds of video of a cougar walking at night through a portion of their study area. The Voyageurs Wolf … 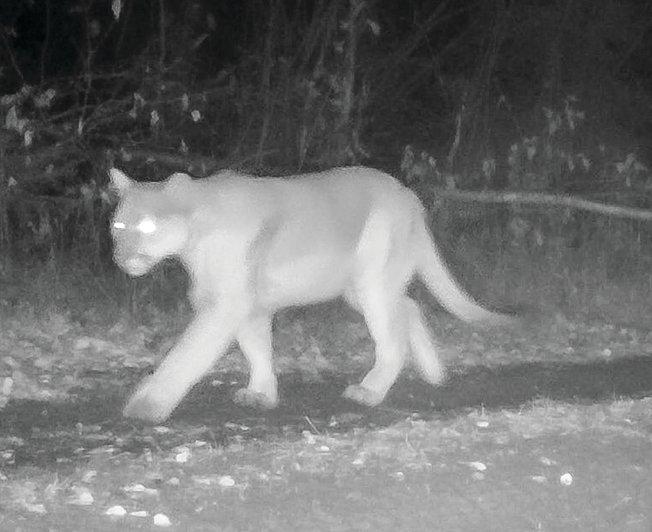 REGIONAL— A study of wolves in and around Voyageurs National Park has captured several seconds of video of a cougar walking at night through a portion of their study area. The Voyageurs Wolf Project has deployed between 150-200 trail cameras through a large study area over the past few years, gathering observational data of wolves and other animals that share the same habitat.
The video, which clearly shows a cougar, or mountain lion, walking slowly along what appears to be a logging road, was shot on Oct. 20, about ten miles south of Voyageurs National Park. It’s the first and, so far, only video the study has captured of a cougar, despite what is almost certainly hundreds of thousands of hours collectively recorded by the study’s trail cameras.
The popularity of trail cameras has made it possible to document that at least a limited number of cougars is occasionally in the state, although the cats are known to range widely and very well may move outside the state’s borders at times. According to the Department of Natural Resources, there have been 59 verified cougar sightings in the state since 2004, or an average of about 3.4 per year. DNR wildlife officials say they believe the bulk of the cougar sightings are wanderers from the western Dakotas.
While numerous trail camera photos and videos of cougars have been reported in recent years to the DNR, the agency reports that many of the images aren’t clear enough to definitively make an identification. That’s not the case with the video and still photos captured of the cougar near Voyageurs. During roughly six seconds, the big cat is clearly visible walking calmly right through the center of the camera frame.
“We figured your readers might be very interested in this,” said study leader Tom Gable, who provided the image and accompanying information to the Timberjay. “At least from our experience, people seem to be fascinated with cougar sightings in the Midwest!” he said.
According to Gable, the research team has not made another cougar sighting since.
While an encounter with a cougar is extremely rare, several North Country residents have reported sightings, and in some cases close encounters with the big cats, to the Timberjay over the years. The DNR maintains that there is no evidence of a breeding population of cougars in Minnesota, yet it’s worth noting that the agency also maintained for years that the state had no breeding population of Canada lynx, a claim that the U.S. Forest Service eventually dismantled through an effort to actually document their existence.