Researchers estimate the animal, seen just south of VNP, could tip the scale at 800 pounds

Put hundreds of trail cams out in the forests of the North Country and you’re likely to have some pretty interesting recordings of wildlife. And that’s certainly been the case for the …

Researchers estimate the animal, seen just south of VNP, could tip the scale at 800 pounds 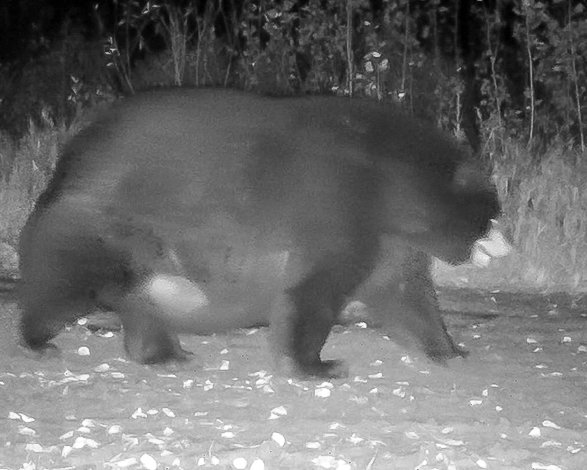 Put hundreds of trail cams out in the forests of the North Country and you’re likely to have some pretty interesting recordings of wildlife. And that’s certainly been the case for the researchers with the Voyageurs Wolf Project, near Voyageurs National Park.
That includes hundreds of images of wolves, including wolf pups, along with beaver, fisher, lynx, bobcats, and black bears.
But of all the images of black bears, few have compared with the monstrous black bear recorded by one of the trail cams on Oct. 7 of this year. Researchers recently posted a short clip of video showing a massive bear so large that its stomach was nearly dragging on the ground. See timberjay.com to watch the giant bear amble (waddle?) through the forest.
“It’s a pretty incredible animal,” said Tom Gable, lead researcher on the project.
The video was shot about five miles south of Voyageurs National Park, near Long Lake.
The big bruin, almost certainly a male, was apparently just passing through on his way to a nice winter den somewhere, where he will certainly have adequate fat reserves to get comfortably through the winter. It’s the only footage the research team has captured of the giant bear, which is why they don’t believe the bear is resident in the Long Lake area.
The researchers believe the bear likely weighed somewhere between 700 and 800 pounds, although it’s hard to know for sure.
According to Gable, officials at the Vince Shute Sanctuary, near Orr, believe the bear may have been among the hundreds of bears that visit the sanctuary each year for the large amount of nutritious food put out by sanctuary staff to attract wild bears. The sanctuary was especially popular with bears this past summer due to the ongoing drought conditions, which sharply limited the wild foods available to bears. At least we know one bear that didn’t miss many meals.

one huge bear at VNP