REGIONAL— A new study citing data from five national parks, including Voyageurs National Park, has concluded that human-caused mortality among gray wolves has a detrimental effect on both the … 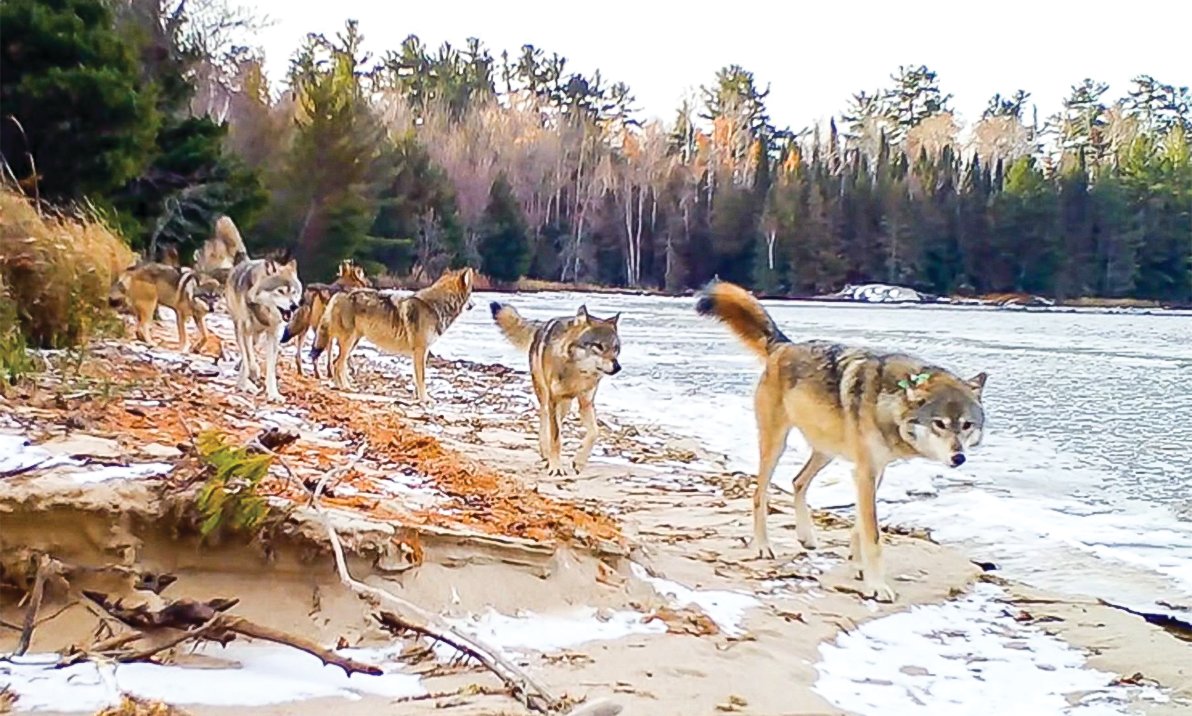 REGIONAL— A new study citing data from five national parks, including Voyageurs National Park, has concluded that human-caused mortality among gray wolves has a detrimental effect on both the persistence of packs and their reproduction. And those impacts may be more profound for wolves at Voyageurs, than those associated with other parks.
The study, published Monday in the journal Frontiers in Ecology and the Environment, cited data from the Voyageurs Wolf Project, an intensive study effort begun in 2012 involving gray wolves that live in and around Voyageurs. While many studies have focused on wolves at a population level, this was one of the first studies to look at the implications of human-caused mortality at the pack level. The study also looked at data from four other national parks with sustaining wolf populations, including Yellowstone, Grand Teton, along with Denali and Yukon-Charley Rivers National Preserve, both located in Alaska. All of the parks included in the study have ongoing research involving GPS-collared wolves.
Wolf pack dynamics have been the subject of considerable research in general for decades, and it’s well known that wolf packs do arise and disappear over time, only to be replaced by other wolf packs in most cases. Yet, the role that humans can sometimes play in those dynamics has only rarely been examined.
Based on the findings of the study, human-caused mortality of wolves comes with significant negative ramifications for packs, including a 27 percent decrease in the probability that a pack will persist to the end of the biological year. It also was found to reduce reproduction by 22 percent the following year.
Human-caused mortality varied considerably among the various parks. Voyageurs stood out for incurring the highest percentage of wolf deaths based on poaching, at 45 percent. Grand Teton, in Wyoming, was second with 20 percent of its human-caused wolf deaths from poaching, while Yellowstone came in third at 11 percent. Poaching was not a factor at the two Alaska parks included in the study.
Researcher Tom Gable, who leads the Voyageurs Wolf Project, offered no explanation for the high poaching rate in Voyageurs, although he said poaching of his collared wolves seems to have declined in recent years. He said most of the poaching occurred during the earlier years of the study and he suggested that publicity around his research, including extensive video he’s posted online of wolf and other wildlife activity in the park, may have helped to change some attitudes.
Gable noted that most of the other parks included in the study have some form of recreational hunt that might reduce the desire of some to take wolves illegally. But he acknowledged there are two schools of thought on that question. One study, published in the journal Nature in 2020 concluded that the introduction of a wolf hunting season in Wisconsin correlated with an apparent increase in the illegal taking of wolves in that state, possibly because the public viewed wolves as less protected. While Gable cited some criticism of that study’s methods, he said most of the poaching of his study animals occurred from 2012-2017. Minnesota maintained a wolf hunting and trapping season from 2012-2014, at which point federal protections for the wolf were reinstated in the Upper Midwest.
Other types of human-caused wolf mortality included vehicle impacts, lethal control, and recreational hunting and trapping. At Voyageurs, hunting and trapping constituted 33 percent of wolf mortality, while vehicle impact and lethal control of problem wolves each amounted to 11 percent of human-caused mortality.
According to the study, the impact of human-caused mortality on the reproductive success and persistence of packs varies based on a number of factors, the size of the pack being the most significant. The total number of mortalities in a pack also made a difference, as did the role of the deceased animal in the pack. Packs that lost a leader, such as an alpha male or female, were less likely to persist or reproduce in the future than packs that didn’t lose their leaders. Indeed, packs that lost their breeding female to human-caused mortality were the least likely to persist. Small packs (with five or fewer wolves) in particular have a less than 25 percent chance of persisting if they lose their breeding female, according to the study’s findings.
While the study does not state so directly, Gable agreed that the findings suggest wolf packs at Voyageurs may face more negative implications from human-caused mortality than wolves in other parks. That’s true primarily because the average pack size in Voyageurs is considerably smaller than at western parks or in Alaska.
“I certainly think that is the implication,” said Gable. “If there are fewer wolves, any loss makes up a larger part of the pack.” According to Gable, the average pack size at Voyageurs is just 4.7 animals, or about half the average pack size found at Yellowstone.
Gable said pack size is often linked to prey size, so wolves in northeastern Minnesota, which prey primarily on whitetail deer and beaver, tend to be smaller than in places where wolves primarily prey on larger species, such as elk, bison, or moose.
In most cases, much of the human-caused wolf mortality noted in the study occurred while wolves were outside the boundaries of the national parks identified. Wolves associated with Voyageurs spent nearly half their time outside the 219,000-acre park, where they are more likely to be vulnerable to human-caused sources of mortality. By contrast, wolves in Yellowstone, one of the country’s largest national parks at 2.22 million acres, rarely stray outside the park.