“I wish I had a river, that I could skate away on…”

As we settle into winter here, I’ve been thinking about why this has become my … 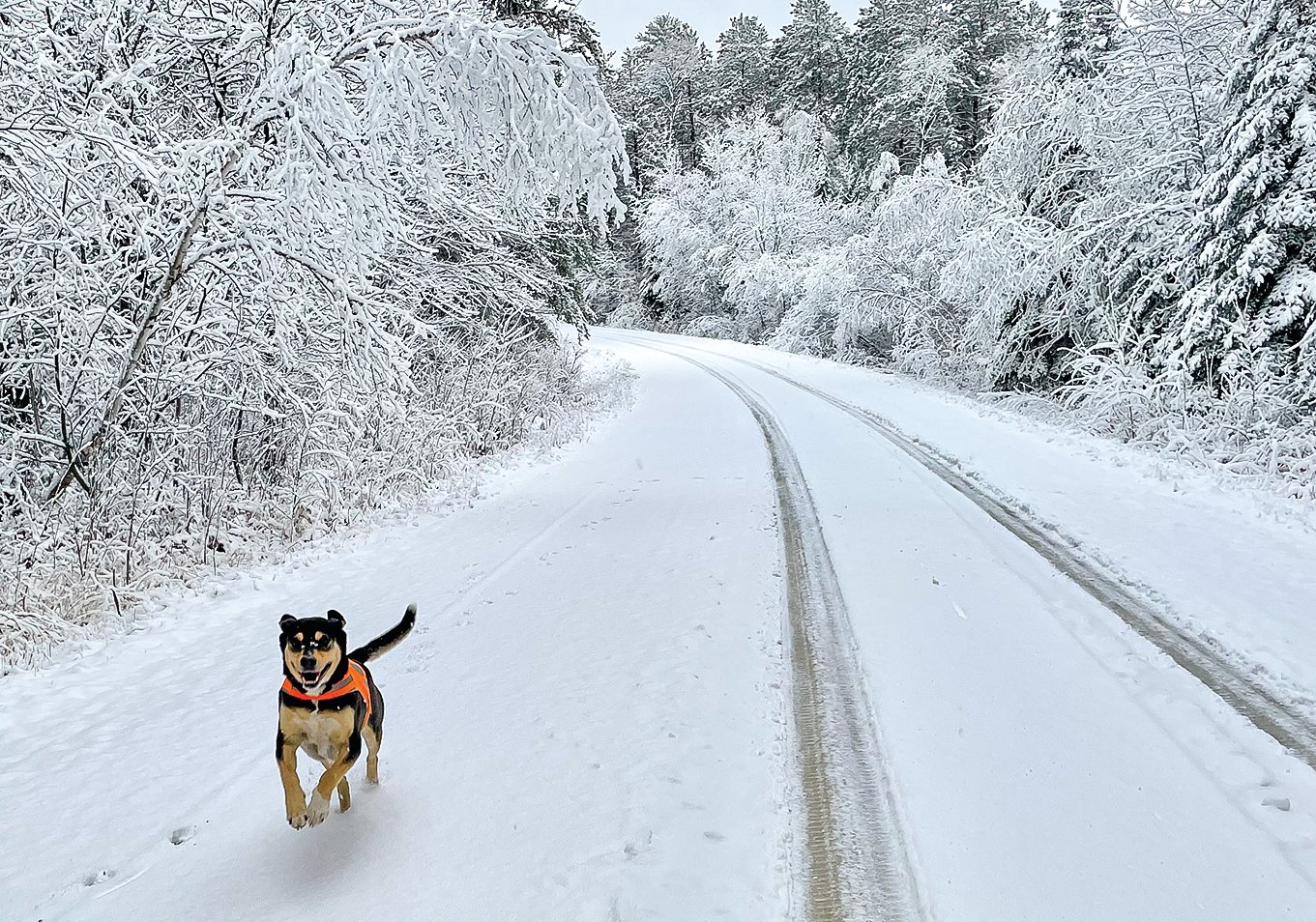 Guess who else loves winter? Our dog Loki was very excited to see the start of the snow season on Veteran’s Day.
M. Helmberger 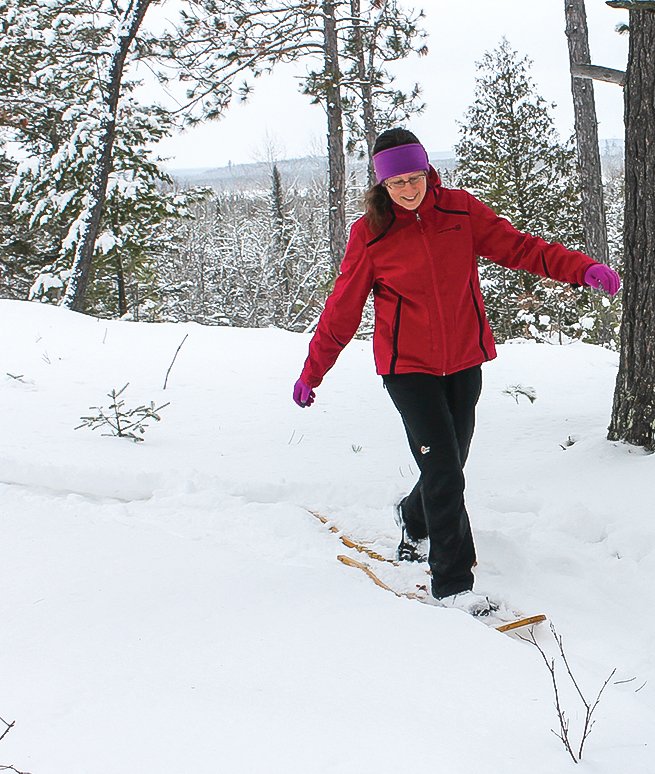 Jodi works her way along our snowshoe trail on a ridge overlooking the Lost Lake Swamp.
M. Helmberger 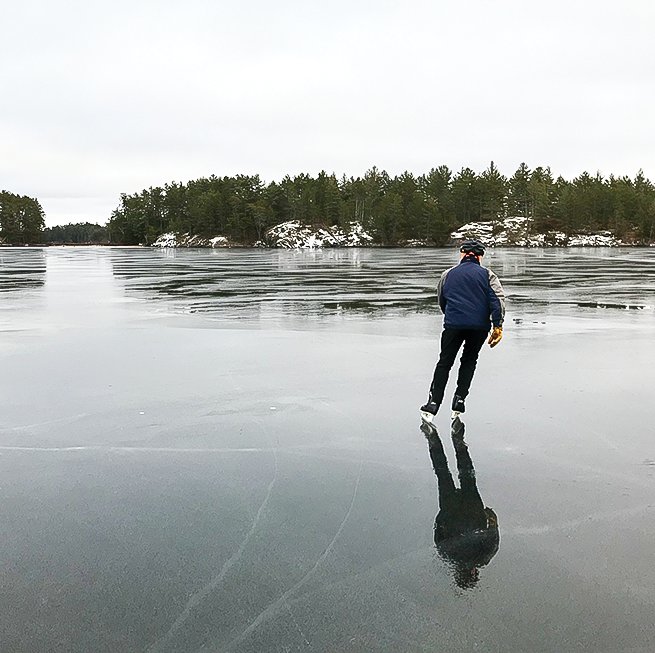 “I wish I had a river, that I could skate away on…”

As we settle into winter here, I’ve been thinking about why this has become my favorite season of the year. Winters here, it seems to me, have gotten a bad rap, and that’s mostly because winter in most other parts of the country is just plain miserable.
In so much of the country, “winter” comes and goes, with an occasional snowstorm followed by rain, followed by a brief cold spell that turns everything to ice, followed by a thaw that turns everything to mud. Then you repeat the cycle all over again for the next three months.
It’s too cold to garden or do most other summertime activities, without the redeeming qualities of actual winter. All you really get out of winter to our south is a heating bill. For those sorry folks who think winter up here is just more of the same, only worse, I can understand why they head south with the first snowflakes in October.
If they only knew.
Here’s an observation I’ve made after 40 years of life in the North Country. Winters here are great, despite the heating bill. It all comes down to getting outside. Here’s the funny thing… for me, winter has become my playtime. During the warmer months, my chore list is virtually endless. Whether its building maintenance at my ever-expanding compound in the woods, gardening, or simply preparing for the next winter that is always right around the corner, I have little time to get out in the woods. And if I did, the woods would be full of deer flies, mosquitoes, and, worst of all, deer ticks.
In winter, it’s too cold for most of that. While climate change has made our winters a bit more unpredictable in recent years, I’ve learned to adapt with a seemingly ever-expanding array of ways to play outside. In November, I start watching the weather, looking for that perfect combination of cold and dry that lets me live out the lyrics of my favorite Joni Mitchell song.
While perfect skating conditions are pretty rare, I started using Nordic skates several years ago, which clip to my cross-country ski boots. They have a longer blade that goes through a little snow or rough patches in the ice better than traditional hockey skates. With Nordic skates, there are decent skating conditions just about every winter. I’ve been out almost daily for the past several days.
If we get snow on the ice, I look for a brief November thaw that puts a crust on the snow once the cold returns. That’s when I get out the skate skis.
As winter goes on, and the powder snow piles deeper, my wife Jodi and I turn to our daily ritual of a morning snowshoe on our two and a half mile-long trail along the edge of the Lost Lake Swamp before heading into work. And we bring our cross-country skis to the office, where we can hit the Tower ski trails, which are groomed once there’s sufficient snow and usually remain so right into April.
Since skating, skiing, and snowshoeing isn’t enough, I took up snowboarding two years ago, just before turning 60. It took a couple trips to the chiropractor, but I finally got the hang of it and am now having fun being one of the only old guys out there on a board. For the first time, I bought a season pass this year at Giants Ridge so I can spend more time on the slopes. That will keep me occupied at least until the arrival of the Moon of the Crusted Snow. In Ojibwe tradition, that corresponds with March, when the sun is getting warmer and the days are getting longer. To me, it’s when the skate ski season kicks into high gear. There’s always good crust skiing on the lakes at that time of year, but when the snow is deep enough and the crust hard enough, the best skiing is out in the swamps. It’s the time I do most of my serious exploring, as I’ve written about here on more than a few occasions.
And did I mention that winter is also the most beautiful season of the year in the North Country? Yes, the peak of fall color is great, but it lasts ten days tops. Winter goes on, and on, and for months the trees are draped in snow, like we experienced already this year after the snow started falling on Veteran’s Day. I tell people who haven’t experienced it that it’s like living in one of those scenic Christmas cards.
Compare that to the slop that passes for snow elsewhere in the country.
That’s the best part about winter here. It’s real winter, the kind you embrace. And if you’re not an outdoors nut, like me, it’s a great time to curl up with a good book by the woodstove with a cup of coffee and contemplate the sparkling beauty outside your window.
Honestly, folks who head south this time of year don’t know what they’re missing. Let’s keep it our little secret…