Missed chances hamper Ely as they slip 14-6 to Bigfork

ELY— It was another case of missed opportunity for the Timberwolves as they dropped their second game of the season Friday, falling 14-6 to Bigfork. Ely’s defense did its part, holding …

Missed chances hamper Ely as they slip 14-6 to Bigfork 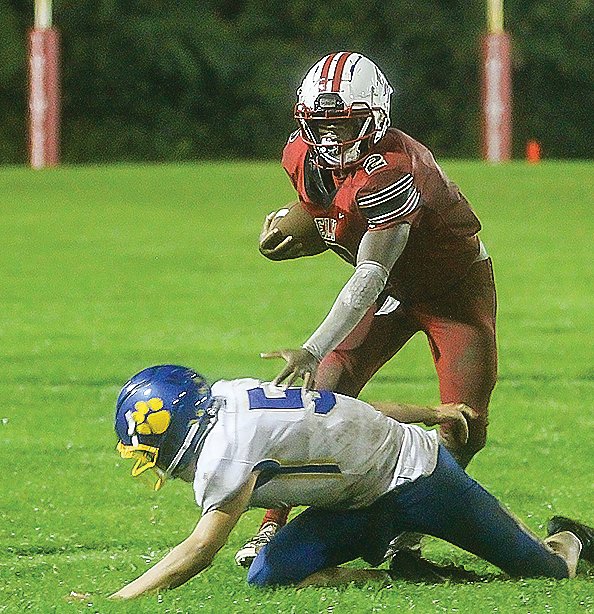 ELY— It was another case of missed opportunity for the Timberwolves as they dropped their second game of the season Friday, falling 14-6 to Bigfork.
Ely’s defense did its part, holding the Huskies to just 14 points, while forcing three turnovers inside the Huskie’s 30 yard-line. “But we didn’t score on any of them,” said Ely Head Coach Louie Gerzin. “That’s what killed us. We didn’t take advantage of the opportunities they gave us.”
While senior runningback Jason Kerntz racked up an impressive 157 yards, the Wolves still struggled to put points on the board. The Wolves also had a touchdown called back on a penalty that proved costly. “We just couldn’t get anything going offensively,” said Gerzin.
Their only touchdown of the evening came on a 63-yard scamper by Kerntz early in the third quarter that knotted the game at six.
But the Huskies weren’t tamed and when they added six points and a two-point conversion later in the third quarter, they notched what proved to be their winning margin.
While the field was wet as a result of rain and drizzle that fell much of the day, Gerzin said the conditions weren’t a negative factor for Ely, which allowed just one turnover. “It’s hard to tell what the problem is on offense,” he added. “We’re going to be looking at things in practice and we’ll be working on it. Gerzin said he’s satisfied that the team has an adequate number of solid plays, but just hasn’t had success executing them on the field. The team has scored a total of just 12 points in the first two games of the season.
Meanwhile, the Ely defense is continuing to keep opponents more or less in line, as players racked up some impressive defensive stats. Junior Deegan Richards tallied nine tackles and broke up two pass plays on the night, while Kerntz managed seven tackles and a fumble recovery. Senior Jakson Hegman added seven tackles and forced a fumble, while sophomore Alex Meriman tallied six and a half tackles, and both forced and recovered a fumble. Junior Chase Anderson added seven tackles, Ashton Cooke tallied five along with a fumble recovery, and senior Erron Anderson added five tackles. Junior Gavin Marshall added four and a half tackles.
The winless Wolves make the long trek to Cook County on Friday to face the 1-1 Vikings.