ELY - State Auditor Rebecca Otto has crisscrossed Minnesota since announcing her campaign for the governor’s seat in January. She stopped in Ely this week to visit Tuesday Group and to host a … 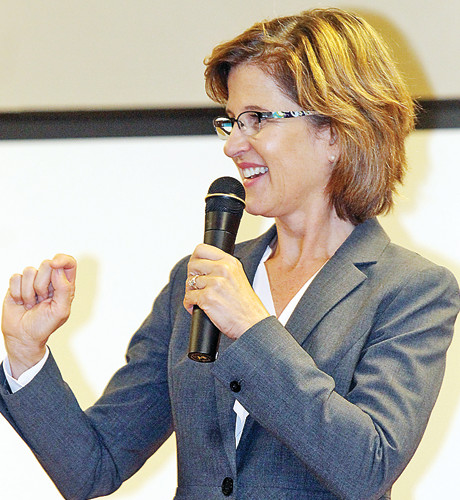 ELY - State Auditor Rebecca Otto has crisscrossed Minnesota since announcing her campaign for the governor’s seat in January. She stopped in Ely this week to visit Tuesday Group and to host a fund-raising reception.

Otto is one of a growing group of DFLers running for governor in 2018. She delivered a summary of her early life, highlighting for the Ely audience the moment when her teenage self fell in love with Minnesota on a camp excursion to the Boundary Waters Canoe Area Wilderness.

“That was a pivotal point in my life,” she told an overflow crowd of at least 100 people at the Grand Ely Lodge.

“I’m telling you this story because it helped form my decision-making process,” Otto said. “For a 14-year-old girl, the deal was this: you had to carry a 75-pound Grumman canoe on your shoulders for 100 yards to go on that trip. I got it done. It transformed my life. I learned not only that I was stronger, physically, than I ever knew, but I also learned that I needed wide-open spaces to process my life,” she said.

The Boundary Waters transformed my life, and I would go on to say that it changes lives everyday. It is an international treasure, and as your governor it is not for sale.”

Otto, 54, was born in California and raised in Illinois. She moved to Minnesota to attend college and stayed, starting a painting and restoration company with her husband and later teaching middle school science for Mounds View Public Schools.

Otto eventually got involved with her son’s school’s parent-teacher organization and ended up leading a school-levy campaign and winning a seat on the Forest Lake school board. While still on the school board, Otto was recruited to run for the state Legislature. She lost her first race, but tried again in a special election, scoring an 11-point victory.

Otto lost her subsequent re-election bid but caught the attention of former Gov. Arne Carlson, who she said encouraged her to run for state auditor. In 2006, Otto ran for auditor and won, unseating a Republican incumbent. She was re-elected twice.

As auditor, Otto is responsible for overseeing more than $20 billion spent each year by local governments. Her staff analyzes financial statements and tracks data on issues ranging from municipal liquor store operations to public pension accounts.

Otto has drawn criticism not just from Republicans but fellow DFLers, especially after her 2013 vote as a member of the state Executive Council to oppose nonferrous mining on land controlled by the state. Otto said she worries that companies that come into the Iron Range won’t look out for the best interests of the area.

Otto talked about her vision as governor of Minnesota, including finding the answers for state residents’ concerns about economic desperation and health. “Those are the kinds of things that keep us up at night,” she said. “Understanding that, as governor, my job is to have a compelling vision for the future of our state.”

Local mining advocate Bill Erzar finally broached the subject that most, if not all, the audience wanted to hear: Otto’s position on sulfide mining.

“This town was built on mining and logging, Erzar said. “I believe we can have mining and clean water here. As one of those on the Executive Council who voted against the renewal of leases for the Twin Metals project, I would like to know what evidence you used, and how you expect the company to determine what the sulfide levels are when they can’t complete their exploration?”

Otto said she voted against a set of non-ferrous mineral leases, not just for the Twin Metals project. “When this set (of leases) came to us, it was after PolyMet had put some information out about 500 years of cleanup for this type of mining,” she said. “As a state auditor I watch out for the taxpayers and our financial future. I made it very clear at the time that I was deeply concerned about our taxpayers inheriting a large financial liability from this type of mining. When PolyMet said their project might need 500 years of treating the water, we don’t know how to run the numbers on that. I don’t even know what kind of government we are going to have in 500 years. A lot can change in that period of time.”

She said she voted against the leases to draw attention to the issue. “I also want the multi-national foreign corporations to know that we might be nice in this state, but we’re not naïve,” she said.

She recalled her small-business experience. “Business is about making money. And for these large companies it is about serving their shareholders, and it is not about taking care of us Minnesotans,” she said. She said she voted the way she did to serve notice that the foreign corporations need to have skin in the game.

She supported the taconite mining industry in Minnesota. “We generally have that down and know how to do it. We’ve done it for a long time.”

She went on to describe copper nickel mining companies as having a bad reputation.“(Sulfide) is a very different kind of mining. If they want to mine in North America, they are going to have to clean up their act,” she said. “They have left (environmental) messes all over the place.”

Otto spoke passionately about taking care of the mine workers in the state. “People have lost their pensions. They have lost their lives. They are not treated well in other parts of the world. Only Minnesota is going to take care of Minnesotans,” she said. “Only we will take care of our workers and make sure they are safe and have safe working conditions.”

She said she didn’t know if PolyMet had committed to using union miners. She asked Erzar if he knew. He struggled to answer, hesitated, and finally said, “I think they are.” That reply elicited an uproar from some members of the audience who maintained there has been no talk of a union shop at this point.

“Without getting people upset, my point is that in Minnesota, we care about our people,” Otto said as a way to diffuse the disagreement in the room. “We care about our workers. We care about where we live. We are not willing to feed the bottom line of big industry. If they want to play in Minnesota they are going to have to play right.”

Otto noted that large companies have a track record of declaring bankruptcy, which is allowed for by law. “It is important to know that when you get to court, the environmental laws that were designed to protect us, don’t always protect us,” she said. “That piece, how it’s going to play out in the courts, we can’t always predict. For me, protecting our people is the first and foremost responsibility.”