SMOKE LAKE— A recent story on Minnesota Public Radio sounded the alarm about a robust algae bloom on two Boundary Waters lakes, suggesting the outbreak of cyanobacteria, also known as … 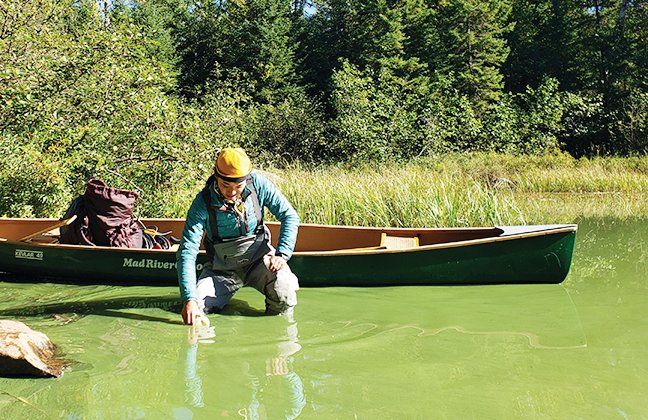 SMOKE LAKE— A recent story on Minnesota Public Radio sounded the alarm about a robust algae bloom on two Boundary Waters lakes, suggesting the outbreak of cyanobacteria, also known as blue-green algae, was potentially linked to climate change or other human factors.
From the photos included with the online version of the story, the bloom did appear to be surprising, with pea soup greens, mixed with stripes of neon teal blue.
The concern about the bloom, experienced on Smoke and Burnt lakes near the end of the Sawbill Trail, was raised by a pair of researchers who said the outbreak was worse than any they had experienced in their previous works on shallow lakes in southern Minnesota and Iowa, which had been heavily impacted by farm fertilizers.
Finding such an outbreak in the middle of the wilderness left them stunned and they now plan to do more research to better understand the cause.
Their findings may be both interesting, and possibly surprising.
For one thing, I spoke with Clare Shirley, who operates Sawbill Outfitters with her husband Dan. The business was formerly run by her father Bill Hansen and before that by her grandparents Frank and Mary Alice Hansen. In other words, there are many decades of familiarity with the surrounding lakes, including Smoke and Burnt. According to Shirley, the two lakes, both of which are shallow with muck bottoms, have had algae blooms in late summer every year since at least the 1930s.
“The oral history on those lakes is very clear,” said Shirley. “It happens every year, like clockwork.”
She said she was disappointed to see that researchers were approaching it like it was something new, or indicative of a problem. While excessive algae growth can be an issue, it doesn’t seem to have diminished interest in the two lakes, both of which are very popular with walleye anglers.
At the same time, it would not be a surprise if this year’s bloom was more pronounced than usual. Algae abundance is controlled by several factors, but the level of nutrients is a big one. In our region, phosphorus is typically the limiting nutrient for algae. Add more phosphorus to a lake and you’ll generally get more algae growth. On developed lakes, phosphorus typically comes from leaky septic systems, municipal sewer discharges, or lawn fertilizers, but even in the wilderness, there are sources of phosphorus. Decaying vegetation, the breakdown of rock, even concentrations of birds, like gulls or cormorants, can increase the phosphorus loading into a lake. Wood ash from wildfires also contains some phosphorus and I’m just going to guess that these two lakes, Smoke and Burnt, experienced wildfire sometime in their relatively recent past that may have added phosphorus to their watersheds.
Weather events over the past year and a half may also have played a role. Runoff from the surrounding watershed largely controls nutrient levels in lakes and last year’s extreme drought likely reduced the amount of runoff significantly. At the same time, we had extensive wildfires around the region, which added a lot of smoke to our air. That smoke is comprised of very fine ash particles and as that ash settles out over time, it spreads the nutrients contained in that ash across the landscape.
Then, add in this past spring’s unprecedented runoff from snowmelt and heavy spring rains and it almost certainly increased the amount of nutrient runoff from lake watersheds all across the region. For most wilderness lakes, it probably wasn’t enough to spark a noticeable algae outbreak, but in shallow, already eutrophic lakes like Smoke and Burnt, it could have kicked a typical late summer bloom into overdrive.
The recent story on the two lakes made the connection to climate change, suggesting that warming waters in area lakes would increase algae growth. While that’s likely true, there’s no evidence that warming waters had any connection to this year’s algae bloom on Smoke and Burnt lakes. In fact, water temperatures in area lakes were generally colder this summer than last, due to a late spring and generally cooler summer temperatures than in 2021.
While I certainly agree that climate change is altering the North Country in many ways, I’m always hesitant to blame climate change for every change we see.
At the same time, I’m very curious to see what the researchers discover in this case. I reached out to researcher Adam Heathcote, who is the director of the Department of Water and Climate Change at the St. Croix Watershed Research Station. He indicated that his research team is looking at, among other things, the role of fire in transporting nutrients. This research he said is being done on remote lakes all over the country. They’ve also been gathering water quality data on several lakes in the region, with readings taken automatically every 30 minutes all summer. The team will also be back at the study lakes this winter to take sediment cores that should help give a long-term view. Lake sediments can be almost like tree rings and researchers can search for algae remains and use DNA testing to determine species and their abundance. They hope to re-create a history of algae growth going back at least 200 years to see what changes, if any, can be detected over time.
It promises to make for interesting findings and I hope to follow up when they have results to report.