These unusual birds of prey offer plenty of surprises

No one would ever call a belted kingfisher shy. Their piercing rattle-like call is among the loudest of any bird in North America and it’s commonly heard here in the North Country, particularly …

These unusual birds of prey offer plenty of surprises 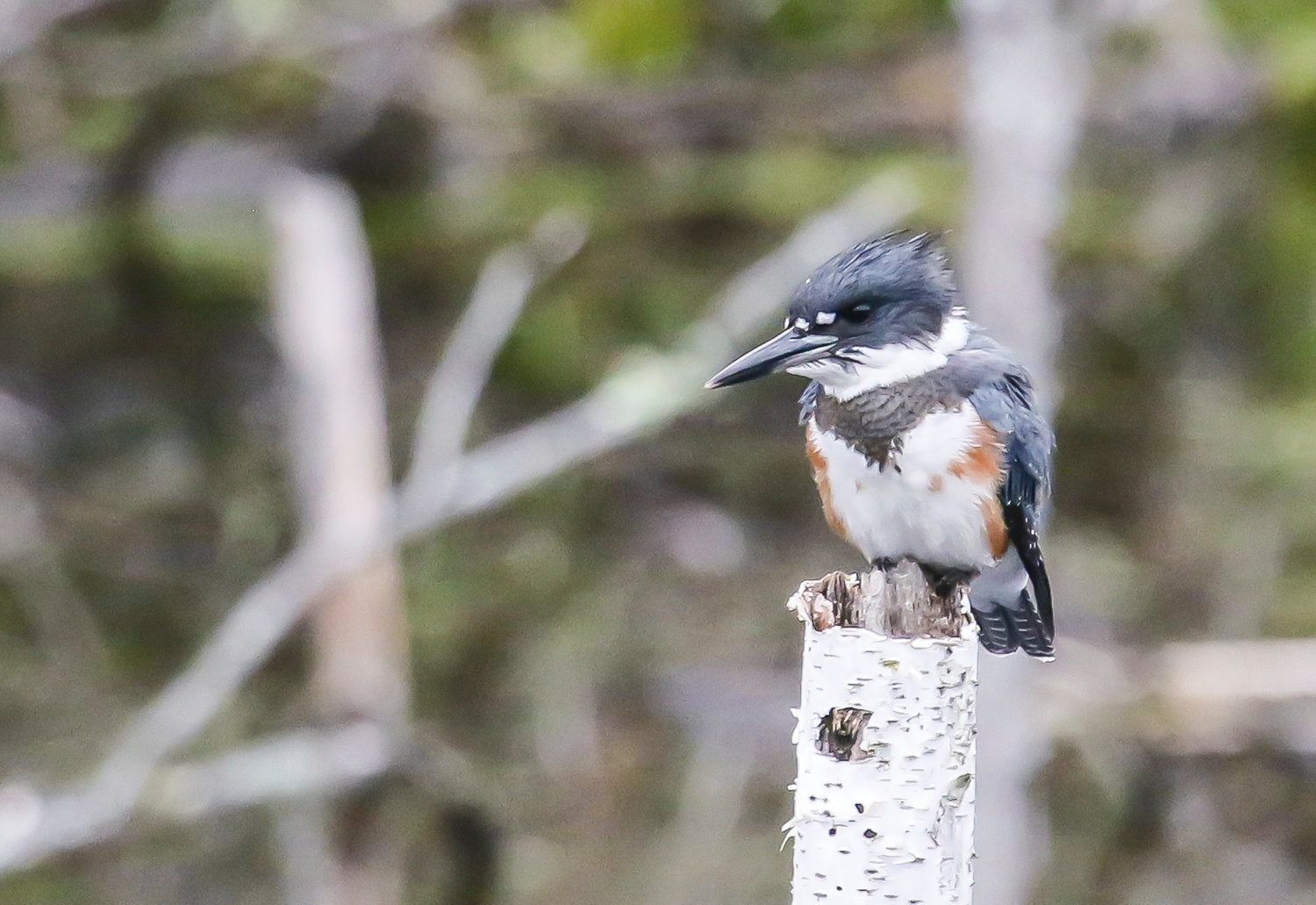 A female belted kingfisher sits on a birch snag in a beaver pond. Note the rusty-orange coloration on portions of the bird’s breast. In the vast majority of bird species, it is the male that is more colorful, but the belted kingfisher is a notable exception. The females are also equally noisy and nearly as aggressive in defending their territory as males.
M. Helmberger 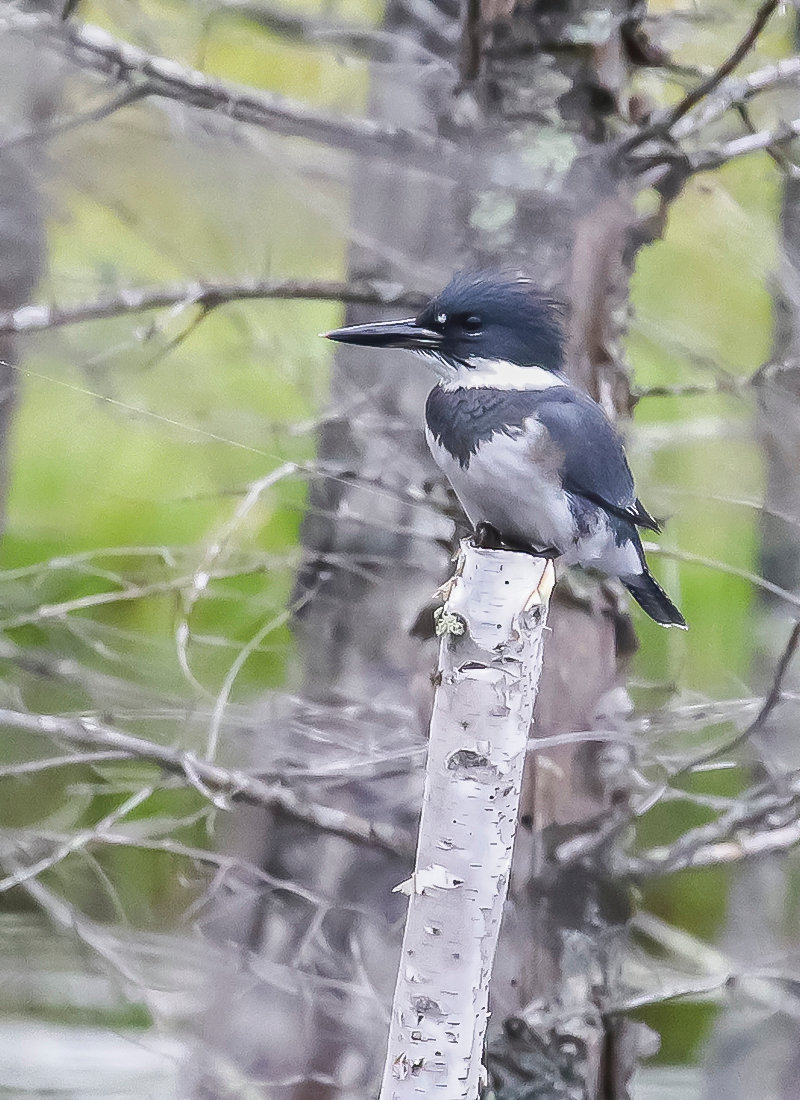 A male belted kingfisher (note the absence of rusty markings) sits on another birch snag in a beaver pond. Kingfishers typically hunt for fish, amphibians, and other small creatures along stream or lake shores.
M. Helmberger
Previous Next
Posted Wednesday, September 7, 2022 7:44 pm

No one would ever call a belted kingfisher shy. Their piercing rattle-like call is among the loudest of any bird in North America and it’s commonly heard here in the North Country, particularly along rivers or lakeshores, where they typically establish and eagerly defend their territories against rival kingfishers.
I ran into what must have been a small family group of kingfishers on a recent morning visit to my neighborhood beaver pond, where the birds were actively feeding, presumably on frogs they were occasionally pulling out of the water.
When I visit the beaver pond, I have a spot where I can just sit and watch and I was able to watch the kingfishers as they fed, and occasionally chased and rattled at each other like rambunctious kids, for more than an hour. As is typical of the species, these birds hunted from elevated perches, like old snags that rise up from the pond, where they’ll sit with their keen eyes, scanning the waters below. Every so often, they’ll suddenly drop down to grab whatever has caught their attention. Kingfishers aren’t just limited to feeding on the surface. Once they spot their prey, they can dive straight down into the water and grab their target in their large, pincer-like beaks. They can also hover in place, something most birds can’t do well, while they wait for the perfect moment to dive.
I suspect kingfishers got their name from their air of self-importance. With their somewhat raggedy crowns, they lord over their riparian territories, sounding off loudly over the slightest intrusion.
Kingfishers are likely more abundant in our region now than before European settlement. That’s because kingfishers are dependent on exposed sandy or gravelly banks for nesting, conditions that were likely relatively scarce here at one time. Kingfishers are unusual in several ways, but they’re one of only a handful of inland birds that nest underground. The banks of inactive gravel pits are particularly attractive locations for kingfishers and you can often see softball-sized holes in the cut banks of such pits, that may well signify the presence of a kingfisher nest. Their actual nest can be well inside the bank, sometimes several feet inside, accessed only through the burrow they’ll dig from the gravelly bank.
Not any gravel pit will do, of course. Belted kingfishers, which are the only species found in Minnesota, feed almost exclusively along streams or shorelines, where they catch small fish, amphibians, and invertebrates like crayfish, so only pits or other exposed banks near water make for the best nesting sites. As you might imagine, these somewhat specialized requirements mean that suitable kingfisher habitat tends to be limited, which is one reason that kingfishers are aggressive in defending their territories. Their loud call and pugnacious attitude have a purpose after all.
While kingfishers are generally found in our region only in the ice-free months, the males stay pretty close to their breeding territories, even in winter. They’ll winter as far north as central Minnesota, where they can usually find just enough open water around rapids to keep themselves fed. But, as soon as the ice starts to break up in the spring, they’ll be back, ready to defend their high-demand territories from interlopers.
Among the other oddities of this species is what is known as reverse sexual dimorphism. Sexual dimorphism is the term for the differences between males and females in a species. In birds, those differences are often significant and in almost all cases, the male of the species is the more colorful. Not so with kingfishers. While the differences aren’t striking, the adult females can be told by the splash of rusty orange on their sides, which often extends nearly across the belly.
Such differences between the species usually have some kind of evolutionary advantage. In birds, bright and often dramatic plumage helps male birds attract mates, but that clearly isn’t the way it works with kingfishers. Researchers haven’t really come to a consensus on why the female kingfisher is the more colorful of the pair, although one theory is that the males are so aggressive in defending their territory from other males that the splash of color helps them identify a female— and a potential mate— when one shows up.
Kingfishers have another habit that’s typical of predatory birds. Because they eat things like fish, frogs, and crayfish, they end up ingesting a lot of bones, scales, and hard shells, none of which is very digestible. So, like other birds of prey, they regurgitate hard pellets containing all of those indigestible parts.
Maybe that’s why they always seem to be in a cantankerous mood.